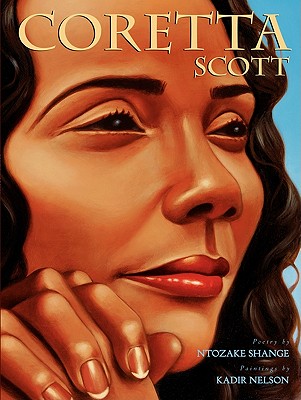 Multiple starred reviews greeted this amazing collaboration between Ntozake Shange and Kadir Nelson. As Booklist put it: “Poet and painter have joined forces to offer an indelible, emotional expression of the strength, beauty, and joy of one woman’s character.”

Walking many miles to school in the dusty road, young Coretta Scott knew the unfairness of life in the segregated south. A yearning for equality began to grow.

Together with Martin Luther King, Jr., she helped lead change through nonviolent protest. It was the beginning of a journey—with dreams of freedom for all.

Ntozake Shange is a celebrated poet and author of many novels and plays, including the Obie Award-winning play For Colored Girls Who Have Considered Suicide/When the Rainbow Is Enuf, which was made into a feature film. Ms. Shange is also the author of several children’s books, including the Coretta Scott King Award-winning book Ellington Was Not a Street, illustrated by Kadir Nelson.

“Poetic language paired with powerful images make this biography/history of the Civil Rights Movement a moving, provacative read–aloud. Every library will want copies of this lyrical tribute to an elegant woman and the era she represents.” — School Library Journal (starred review)

“Poet and painter have joined forces to offer an indelible, emotional expression of the strength, beauty, and joy of one woman’s character.” — Booklist (starred review)