After the Dance: My Life with Marvin Gaye (Paperback) 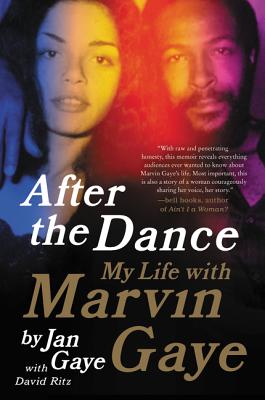 A riveting cautionary tale about the ecstasy and dangers of loving Marvin Gaye, a performer passionately pursued by all—and a searing memoir of drugs, sex, and old school R&B from the wife of legendary soul icon Marvin Gaye.

After her seventeenth birthday in 1973, Janis Hunter met Marvin Gaye—the soulful prince of Motown with the seductive liquid voice whose chart-topping, socially conscious album What’s Going On made him a superstar two years earlier. Despite a seventeen-year-age difference and Marvin’s marriage to the sister of Berry Gordy, Motown’s founder, the enchanted teenager and the emotionally volatile singer began a scorching relationship.

One moment Jan was a high school student; the next she was accompanying Marvin to parties, navigating the intriguing world of 1970s-‘80s celebrity; hanging with Don Cornelius on the set of Soul Train, and helping to discover new talent like Frankie Beverly. But the burdens of fame, the chaos of dysfunctional families, and the irresistible temptations of drugs complicated their love.

Primarily silent since Marvin’s tragic death in 1984, Jan at last opens up, sharing the moving, fervently charged story of one of music history’s most fabled marriages. Unsparing in its honesty and insight, illustrated with sixteen pages of black-and-white photos, After the Dance reveals what it’s like to be in love with a creative genius who transformed popular culture and whose artistry continues to be celebrated today.

Jan Gaye is the second wife of the legendary recording artist Marvin Gaye and the mother of his children, Nona and Frankie Gaye. Born in Los Angeles, she currently resides in Rhode Island.

David Ritz is the author of the acclaimed novels The Man Who Brought the Dodgers Back to Brooklyn and Blue Notes Under a Green Felt Hat. He is the only four-time winner of the Gleason Book of the Year Award. He's also co-written the memoirs of many celebrities.

“After the Dance: My Life With Marvin Gaye is billed as a new tell-all memoir. And it lives up to the hype.” — LA Weekly

“With sensitivity and insight, Gaye examines their explosive four-year marriage, ultimately making peace with the dark side of one of America’s most influential partners.” — O, The Oprah Magazine

“...a story told honestly and directly, with real passion and plenty of behind-the-scenes insight. — Booklist

“If your heart is not affected greatly after reading, it’s time for a checkup... What a fabulous book of poems.” — Washington Independent Review of Books

“Jan and Marvin’s love affair is hot-and at times amazingly cold. We see how love can bring people together as well as tear them apart. This fascinating and entertaining memoir is an unforgettable education on the power of love.” — Zane, New York Times bestselling author

“With raw and penetrating honesty, this memoir reveals everything audiences ever wanted to know about Marvin Gaye’s life. Most important, this is also a story of a woman courageously sharing her voice, her story.” — bell hooks, author of Ain't I a Woman

“The story made me emotional, confused, and sympathetic, all at the same time. Love, drugs, power, and demons-with a hint of other celebrity lives intertwined-make up Jan’s story with the legendary crooner. The raw storytelling, full of secrets kept until now, makes this book a treasure.” — LisaRaye McCoy, actress

“This stunning memoir is hot! It’s also unforgettable in its pain and vulnerability, which Jan Gaye presents with raw honesty. It will make all women love differently, but probably no less passionately.” — Grace Octavia, author of Something She Can Feel