Sweetie Pie's Cookbook: Soulful Southern Recipes, from My Family to Yours (Paperback) 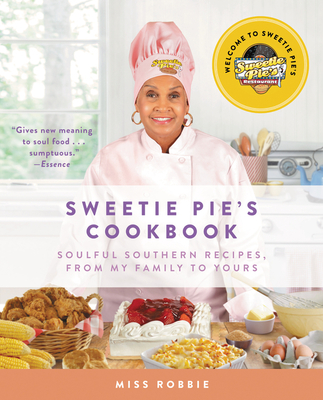 Sweetie Pie's Cookbook: Soulful Southern Recipes, from My Family to Yours (Paperback)

The beloved owner of the wildly popular Sweetie Pie's restaurant, and star of the OWN reality television show Welcome to Sweetie Pie's shares recipes for her renowned soul food and the lessons she's learned on the path to success.

Growing up in Mississippi and St. Louis, Robbie Montgomery, the oldest of nine children, was often responsible for putting meals on the family table. Working side by side with her mother in their St. Louis kitchen, Robbie learned to prepare dozens of classic soul food dishes.

Now, at seventy-two, Miss Robbie passes down those traditions for generations of fans to enjoy in Sweetie Pie's Cookbook. Robbie takes you into the kitchen to prepare her most favored meals—smothered pork chops, salmon croquettes, baked chicken—and tells you heartfelt and humorous stories, including amazing tales from her life at the restaurant and on the road as a back-up singer. Miss Robbie began her culinary career on the road—in the segregated America of the1960s, finding welcoming restaurants in small cities and towns was often challenging for African-Americans. When a collapsed lung prematurely ended her singing career, Miss Robbie returned to St. Louis, using her formidable cooking talent to open a soul food restaurant that would make her legend.

Through her show and this special cookbook, Miss Robbie hopes to maintain the place of soul food cooking—its recipes, history, and legacy—in American culture for decades to come.

Miss Robbie Montgomery is the owner of Sweetie Pie's, the nationally acclaimed soul food restaurants she founded in her hometown of St. Louis, Missouri. Prior to running her own restaurants, Miss Robbie toured as a back-up singer for several musical artists including Ike and Tina Turner, the Supremes, Stevie Wonder, James Brown, Patti LaBelle, and others. Miss Robbie started cooking while she was traveling with these groups on the road. Her restaurant reality show has been featured on the OWN Network.