Defining Moments in Black History: Reading Between the Lies (Hardcover) 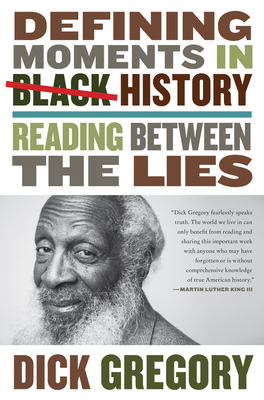 Defining Moments in Black History: Reading Between the Lies (Hardcover)

With his trademark acerbic wit, incisive humor, and infectious paranoia, one of our foremost comedians and most politically engaged civil rights activists looks back at 100 key events from the complicated history of black America.

A friend of luminaries including Dr. Martin Luther King, Jr. and Medgar Evers, and the forebear of today’s popular black comics, including Larry Wilmore, W. Kamau Bell, Damon Young, and Trevor Noah, Dick Gregory was a provocative and incisive cultural force for more than fifty years. As an entertainer, he always kept it indisputably real about race issues in America, fearlessly lacing laughter with hard truths. As a leading activist against injustice, he marched at Selma during the Civil Rights movement, organized student rallies to protest the Vietnam War; sat in at rallies for Native American and feminist rights; fought apartheid in South Africa; and participated in hunger strikes in support of Black Lives Matter.

In this collection of thoughtful, provocative essays, Gregory charts the complex and often obscured history of the African American experience. In his unapologetically candid voice, he moves from African ancestry and surviving the Middle Passage to the enjoyment of bacon and everything pig, the headline-making shootings of black men, and the Black Lives Matter movement. A captivating journey through time, Defining Moments in Black History explores historical movements such as The Great Migration and the Harlem Renaissance, as well as cultural touchstones such as Sidney Poitier winning the Best Actor Oscar for Lilies in the Field and Billie Holiday releasing Strange Fruit.

An engaging look at black life that offers insightful commentary on the intricate history of the African American people, Defining Moments in Black History is an essential, no-holds-bar history lesson that will provoke, enlighten, and entertain.

Richard “Dick” Claxton Gregory was an African American comedian, civil rights activist, and cultural icon who first performed in public in the 1950s. He was on Comedy Central’s list of “100 Greatest Stand-Ups” and was the author of fourteen books, most notably the bestselling classic Nigger: An Autobiography. A hilariously authentic wisecracker and passionate fighter for justice, Gregory is considered one of the most prized comedians of our time. He and his beloved wife, Lil, have ten kids.

“In an unprcedented show of compassion and courage, Dick Gregory has knitted together side-splitting humor and hard truths. He has awakened generations of Americans who bow when they hear his name.”
— Susan L. Taylor, Founder of the National Cares Mentoring Movement and Editor-in-Chief Emerita of Essence Magazine

“Gregory’s examination of American history from a black perspective is both humorous and inspiring.” — Booklist

“I am honored to recommend my good friend Dick Gregory’s narrative on the history of America as a vital resource manual for this and future generations. For over fifty years, Dick has trusted in God to enable him to fearlessly speak truth to power and bring revelation to the masses without regard for negative consequences or financial reward. The world we live in can only benefit from reading and sharing this important work with anyone who may have forgotten or is without comprehensive knowledge of true American history.” — Martin Luther King III