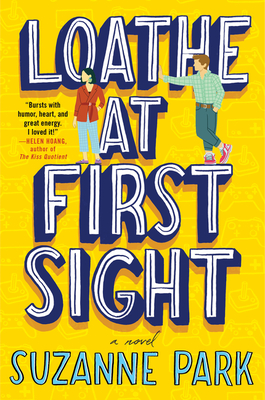 ONE OF NPR'S BEST BOOKS OF THE YEAR!

“Bursts with humor, heart, and great energy. I loved it! Park is a hilarious new voice in women’s fiction.”—Helen Hoang, author of The Kiss Quotient

“[A] punchy adult debut set in the world of video game design. Park makes tough topics go down easy by couching them in wry humor and lighthearted romance, and her fierce, snarky heroine is irresistible. This smart rom-com is a winner.”—Publishers Weekly (starred review)

In a debut perfect for fans of Jasmine Guillory and Sally Thorne, a junior video game producer finds herself getting closer and closer to the one person she hates most after a mass troll attack online almost ruins her life.

Melody Joo is thrilled to land her dream job as a video game producer, but her new position comes with challenges: an insufferable CEO; sexist male coworkers; and an infuriating—yet distractingly handsome—intern, Nolan MacKenzie, aka “the guy who got hired because his uncle is the boss.”

Just when Melody thinks she’s made the worst career move of her life, her luck changes. While joking with a friend, she creates a mobile game that has male strippers fighting for survival in a post-apocalyptic world. Suddenly Melody’s “joke” is her studio’s most high-profile project—and Melody’s running the show.

When Nolan is assigned to Melody’s team, she’s sure he’ll be useless. But as they grow closer, she realizes he’s smart and attractive, which makes Melody want to forget he’s her intern. As their attraction deepens, she knows it’s time to pump the brakes, even with her Korean parents breathing down her neck to hurry up and find a man.

With her project about to launch, Melody suddenly faces a slew of complications, including a devastating trolling scandal. Could the man she’s falling hard for help her play the game to win—in work and in love?

Suzanne Park is a Korean-American writer who was born and raised in Tennessee. As a comedienne, she was selected to appear on BET's "Coming to the Stage." Suzanne was also the winner of the Seattle Sierra Mist Comedy Competition, and was a semi-finalist in NBC's "Stand Up For Diversity" showcase in San Francisco.

Suzanne graduated from Columbia University and received an MBA from UCLA. She currently resides in Los Angeles with her husband, female offspring, and a sneaky rat that creeps around on her back patio. In her spare time, she procrastinates. Loathe at First Sight is her adult debut.

“Loathe at First Sight bursts with humor, heart, and great energy. I loved it! Park is a hilarious new voice in women’s fiction.” — Helen Hoang, author of The Kiss Quotient

“Hilarious and poignant, Park’s debut sparkles as a great addition to the new voices of the rom com renaissance.”

“Park gives us the story that only she could create. It's hilarious, smart, and the rom-com we need!” — Alexa Martin, ALA Award-winning author of Intercepted

"Park has created a wholly original, smart, fierce heroine (with a hilarious inner voice) who takes on an industry hell-bent on underestimating her...Just like the “entertaining, fresh, snarky” video game she conjures in her novel, Suzanne Park has written a fast and fun debut, putting females in the lead." — Amy Poeppel, author of Musical Chairs and Small Admissions

“[A] punchy adult debut set in the world of video game design. Park makes tough topics go down easy by couching them in wry humor and lighthearted romance, and her fierce, snarky heroine is irresistible. This smart rom-com is a winner.” — Publishers Weekly (starred review)

“Park's first book for adults is a funny and feminist geek novel... Readers into both gaming and women’s fiction will scramble for this fast-paced charmer.” — Booklist