Jump: My Secret Journey from the Streets to the Boardroom (Hardcover) 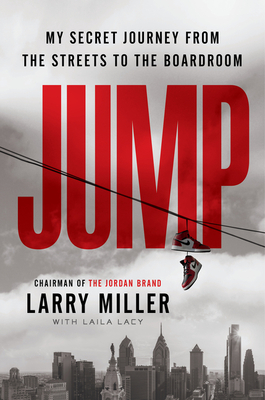 Jump: My Secret Journey from the Streets to the Boardroom (Hardcover)

One of the most successful Black businessmen in the country, who has led Nike’s Jordan Brand from a $200M sneaker company to a $4B global apparel juggernaut, tells the remarkable story of his rise from gangland violence to the pinnacles of international business.

Jump tells Larry Miller’s journey from the violent streets of West Philly in the 1960s to the highest echelons of American sports and industry. Miller wound up in jail more than once, especially as a teenager. But he immersed himself in the educational opportunities, eventually took advantage of a Pennsylvania state education-release program offered to incarcerated people, and was able to graduate with honors from Temple University.

When revealing his gangland past caused him to lose his first major job opportunity, Miller vowed to keep it a secret. He climbed the corporate ladder with a number of companies such as Kraft Foods, Campbell’s Soup, and Jantzen, until Nike hired him to run its domestic apparel operations. Around the time of Michael Jordan’s basketball retirement, Nike Chairman Phil Knight made Larry Miller president of the newly formed Jordan Brand. In 2007 Paul Allen convinced Miller to jump to the NBA to become president of the Portland Trailblazers, one of the first African-Americans to lead a professional sports team, before returning to Jordan Brand in 2012.

All along, Miller lived two lives: the secret of his violent past haunted him, invading his days with migraines and his sleep with nightmares of getting hauled back to jail. More than a rags-to-riches story, Jump is also a passionate appeal for criminal justice reform and expanded educational opportunities for incarcerated and formerly incarcerated people across the United States. Drawing on his powerful personal story, as well as his vast and well-connected network, Miller plans to use Jump as a launching point to help expand such opportunities and to provide an aspirational journey for those who need hope.

Larry Miller was appointed the first chairman of the Jordan Brand Advisory Board in January 2019. Under his leadership, Jordan Brand has grown from a $200-million basketball-shoe company to a $4-billion athletic footwear and apparel firm. Miller helped found the Jordan Brand at Nike in 1999 before becoming president of the Portland Trailblazers from 2007 to 2012, after which he returned to Jordan Brand. Miller graduated with honors from Temple University in 1980 and earned an MBA from LaSalle University. He has served on the boards of directors of Self Enhancement, Inc. A passionate advocate for education and mentorship, he’s taken leadership roles with the Urban League and Junior Achievement in the past. Born in Philadelphia, he lives in Portland, OR.

Laila Lacy, a native of Philadelphia, graduated from Central High School. She earned a degree from Howard University in Washington, DC, where she studied Psychology and Human Communications and has studied at New York’s Bank Street Graduate School of Education. Lacy taught middle school for the New York Board of Education and later served as a business development manager for several mortgage banking firms in California. In addition to collaborating on her father’s memoir, she’s been a tutor, writing coach, school volunteer and written op-eds and product reviews that have been featured in the several online magazines. She lives in Southern California with her husband and three children.