Our Gen: A Novel (Hardcover) 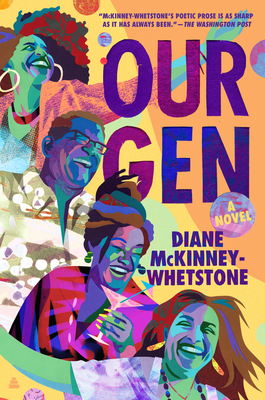 Our Gen: A Novel (Hardcover)

Residents of an active-living retirement community revert to lives of youthful indulgence, even as time-bomb secrets of their pasts tick toward explosion.

The Gen—short for Sexagenarian—is an upscale fifty-five-plus community located in the bucolic suburbs of Philadelphia. Main character Cynthia befriends the Gen’s two other Black residents, Bloc and Tish, as well as Lavia, who everyone assumes is from India. They regularly convene to smoke weed, line dance, and debate politics and philosophy as the wine goes down like silk. Their camaraderie is exhilarating.

But beneath the fun and froth, storms gather. With its walls of windows gushing light and air, the Gen becomes the catalyst for secrets to be exposed.

Shifting the narrative between the characters’ pasts and the present day, Diane McKinney-Whetstone deftly builds suspense as she captures with insight, poignancy, and humor, the scars, tenderness, and swagger of those not yet old, but no longer young, coming to the mean acceptance that life is finite after all, who knew.

The author of the critically acclaimed novels Tumbling, Tempest Rising, Blues Dancing, Leaving Cecil Street, and Trading Dreams at Midnight, Diane McKinney-Whetstone is the recipient of numerous awards, including the Black Caucus of the American Library Association’s Literary Award for Fiction, which she won twice. She lives in Philadelphia with her husband. For more on Diane McKinney-Whetstone please visit www.mckinney-whetstone.com or follow her on Twitter @Dianemckwh.

“Our Gen is warm and smart, accessible yet meaningful, a beach read with strong writing and emotional heft.” — BookPage