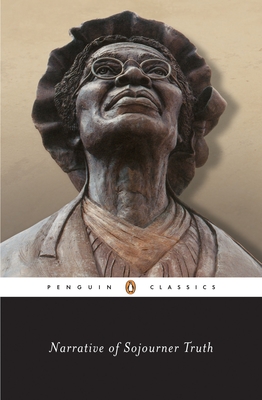 
Usually Ships in 1-5 Days
Truth's landmark slave narrative chronicles her experiences as a slave in upstate New York and her transformation into an extraordinary abolitionist, feminist, orator, and preacher. Based on the complete 1884 edition, this volume includes the "Book of Life," a collection of letters and sketches about Truth's life written subsequent to the original 1850 publication of the Narrative, and "A Memorial Chapter," a sentimental account of her death.

For more than seventy years, Penguin has been the leading publisher of classic literature in the English-speaking world. With more than 1,700 titles, Penguin Classics represents a global bookshelf of the best works throughout history and across genres and disciplines. Readers trust the series to provide authoritative texts enhanced by introductions and notes by distinguished scholars and contemporary authors, as well as up-to-date translations by award-winning translators.
Sojourner Truth, born Isabella, a slave in Ulster County, New York, around 1797, became an abolitionist, orator, and preacher, and eventually an icon for strong black women. She was emancipated by state law in 1827, and the following year she moved to New York City, where she found work in wealthy households and became increasingly involved in unorthodox religious groups. In the early 1830s she joined the commune or “Kingdom” of the Prophet Matthias. By 1843 she had transformed herself into the itinerant preacher Sojourner Truth, and spent most of the next thirteen years in Northampton, Massachusetts. Illiterate, she dictated her autobiography to her neighbor Olive Gilbert, and the Narrative of Sojourner Truth was published in 1850. The following year Truth set out to promote her book and to speak out on abolition and women’s rights. In the 1870s Truth’s friend and informal manager Frances Titus compiled a new edition of the Narrative, adding the “Book of Life,” a scrapbook comprising essays, articles, and letters from Truth’s contemporary admirers. Truth died in Battle Creek, Michigan, in 1883, and the following year Titus published a new edition that included “A Memorial Chapter.”

Nell Irvin Painter is the author of Sojourner Truth: A Life, A Symbol and Standing at Armageddon, the United States, 1877-1919, The Narrative of Hosea Hudson and Exodusters: Black Migration to Kansas After Reconstruction. She is Edwards Professor of History at Princeton University, where she currently heads the program in African-American Studies.
"The time is long overdue for a compelling look at the legendary Sojourner Truth. Margaret Washington deserves our gratitude for reclaiming Truth and shedding light on the most enigmatic black woman of the 19th century."