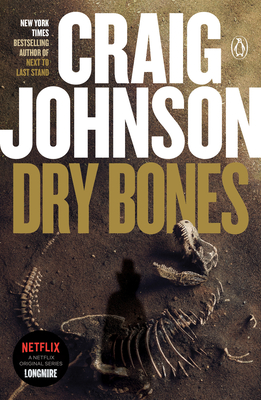 This is book number 11 in the A Longmire Mystery series.

When Jen, the largest, most complete Tyrannosaurus rex skeleton ever found surfaces in Sherriff Walt Longmire’s jurisdiction, it appears to be a windfall for the High Plains Dinosaur Museum—until Danny Lone Elk, the Cheyenne rancher on whose property the remains were discovered, turns up dead, floating face down in a turtle pond. With millions of dollars at stake, a number of groups step forward to claim her, including Danny’s family, the tribe, and the federal government. As Wyoming’s Acting Deputy Attorney and a cadre of FBI officers descend on the town, Walt is determined to find out who would benefit from Danny’s death, enlisting old friends Lucian Connolly and Omar Rhoades, along with Dog and best friend Henry Standing Bear, to trawl the vast Lone Elk ranch looking for answers to a sixty-five-million-year-old cold case that’s heating up fast.
Craig Johnson is the New York Times bestselling author of the Longmire mysteries, the basis for the hit Netflix original series Longmire. He is the recipient of the Western Writers of America Spur Award for fiction, the Mountains and Plains Booksellers Award for fiction, the Nouvel Observateur Prix du Roman Noir, and the Prix SNCF du Polar. His novella Spirit of Steamboat was the first One Book Wyoming selection. He lives in Ucross, Wyoming, population twenty-five.

“Fast-paced [and] entertaining . . . Johnson, as usual, offers colorful glimpses of Wyoming history and its physical features. Johnson is able to make the landscape itself at least as fascinating as the slightly off-kilter, and sometimes murderous, folks that inhabit Walt’s universe.”
—Denver Post

“An especially good tale . . . If you are not familiar with Longmire, you might want to meet him. If you know him, don’t miss his latest case.”
—Charleston Post & Courier

“The [Longmire] series continues to be fresh and innovative. In Dry Bones, Johnson accomplishes this through a ‘sixty-five-million-year-old cold case’ with current social and political implications, as well as via vibrantly complex characters. Devoted series fans won't feel a sense of déjà vu in Dry Bones, but they will easily identify Johnson's tendency toward innovative imagery (‘my brain felt like it was bouncing around like a sneaker inside a washing machine’), crack dialogue, humor and a strong sense of place. Absaroka's maker brings dem bones to life, and readers are sure to rejoice.”
—Shelf Awareness

Praise for Craig Johnson and the Longmire Series

“It’s the scenery—and the big guy standing in front of the scenery—that keeps us coming back to Craig Johnson’s lean and leathery mysteries.”
—The New York Times Book Review

“Like the greatest crime novelists, Johnson is a student of human nature. Walt Longmire is strong but fallible, a man whose devil-may-care stoicism masks a heightened sensitivity to the horrors he’s witnessed.”
—Los Angeles Times

“Johnson's hero only gets better—both at solving cases and at hooking readers—with age.”
—Publishers Weekly

“Johnson’s trademarks [are] great characters, witty banter, serious sleuthing, and a love of Wyoming bigger than a stack of derelict cars.”
—The Boston Globe

“Johnson’s pacing is tight and his dialogue snaps.”
—Entertainment Weekly

“Stepping into Walt’s world is like slipping on a favorite pair of slippers, and it’s where those slippers lead that provides a thrill. Johnson pens a series that should become a ‘must’ read, so curl up, get comfortable, and enjoy the ride.”
—The Denver Post