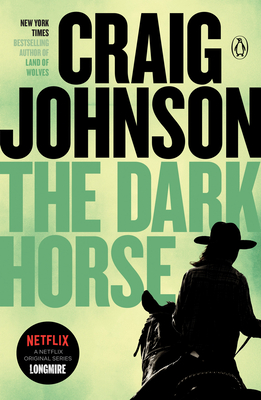 This is book number 5 in the A Longmire Mystery series.

“Mary Barsad is accused of having shot her husband six times as partial retribution for his setting fire to their barn and killing her horses. But Sheriff Walt Longmire is not convinced she did it, and he sets off to see if he's right. Craig Johnson's latest is another winner in this compelling western mystery series.”
— Sue Tank, Paulina Springs Books, Sisters, OR

Fans of Ace Atkins, Nevada Barr and Robert B. Parker will love The Dark Horse is the fifth installment in New York Times bestselling author Craig Johnson's Longmire Mystery Series, the basis for LONGMIRE, the hit Netflix original drama series. Wade Barsad, a man with a dubious past and a gift for making enemies, burned his wife Mary's horses in their barn; in retribution, she shot him in the head six times, or so the story goes. But Sheriff Walt Longmire doesn't believe Mary's confession and is determined to dig deeper. Unpinning his star to pose as an insurance investigator, Walt visits the Barsad ranch and discovers that everyone in town--including a beautiful Guetemalan bartender and a rancher with a taste for liquor--had a reason for wanting Wade dead.

Craig Johnson is the New York Times bestselling author of the Longmire mysteries, the basis for the hit Netflix original series Longmire. He is the recipient of the Western Writers of America Spur Award for fiction, the Mountains and Plains Booksellers Award for fiction, the Nouvel Observateur Prix du Roman Noir, and the Prix SNCF du Polar. His novella Spirit of Steamboat was the first One Book Wyoming selection. He lives in Ucross, Wyoming, population twenty-five.
Praise for Craig Johnson and the Walt Longmire Mystery Series

"It's the scenery—and the big guy standing in front of the scenery—that keeps us coming back to Craig Johnson's lean and leathery mysteries." —The New York Times Book Review

"Johnson's hero only gets better—both at solving cases and at hooking readers—with age." —Publishers Weekly

"Like the greatest crime novelists, Johnson is a student of human nature. Walt Longmire is strong but fallible, a man whose devil-may-care stoicism masks a heightened sensitivity to the horrors he's witnessed." —Los Angeles Times

"Johnson's trademarks [are] great characters, witty banter, serious sleuthing, and a love of Wyoming bigger than a stack of derelict cars." —The Boston Globe

"The characters talk straight from the hip and the Wyoming landscape is its own kind of eloquence." —The New York Times

"[Walt Longmire] is an easy man to like. . . . Johnson evokes the rugged landscape with reverential prose, lending a heady atmosphere to his story." —The Philadelphia Inquirer

"Stepping into Walt's world is like slipping on a favorite pair of slippers, and it's where those slippers lead that provides a thrill. Johnson pens a series that should become a 'must' read, so curl up, get comfortable, and enjoy the ride." —The Denver Post

"Johnson's pacing is tight and his dialogue snaps." —Entertainment Weekly