The Amistad Rebellion: An Atlantic Odyssey of Slavery and Freedom (Paperback) 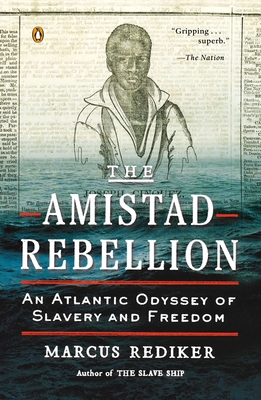 A unique account of the most successful slave rebellion in American history, now updated with a new epilogue—from the award-winning author of The Slave Ship

In this powerful and highly original account, Marcus Rediker reclaims the Amistad rebellion for its true proponents: the enslaved Africans who risked death to stake a claim for freedom. Using newly discovered evidence and featuring vividly drawn portraits of the rebels, their captors, and their abolitionist allies, Rediker reframes the story to show how a small group of courageous men fought and won an epic battle against Spanish and American slaveholders and their governments. The successful Amistad rebellion changed the very nature of the struggle against slavery. As a handful of self-emancipated Africans steered their own course for freedom, they opened a way for millions to follow.

This edition includes a new epilogue about the author's trip to Sierra Leona to  search for Lomboko, the slave-trading factory where the Amistad Africans were incarcerated, and other relics and connections to the Amistad rebellion, especially living local memory of the uprising and the people who made it.

Marcus Rediker is the Distinguished Professor of Atlantic History at the University of Pittsburgh and the award-winning author of The Slave Ship. He lives in Pittsburgh.

“The great strength of this work—aside from Rediker’s vivid style as a writer and meticulous research—is that he brings the Amistad Africans back to center stage where they have often been pushed to the side.”—Pittsburgh Post-Gazette

“Spectacularly researched and fluidly composed, this latest study offers some much needed perspective on a critical yet often overlooked event in America’s history.”—Publishers Weekly (starred review)

"A totally enthralling account of the Amistad rebellion and its place in the broader American story of revolt against a great threat to liberty."—Booklist (starred review)

"A first-rate example of history told from the bottom up."—Kirkus (starred review)

"Rediker takes a fresh approach to the Amistad rebellion by focusing on the Africans who revolted rather than on the American political and judicial response, which takes the central place in most previous works."—Library Journal