Silent Covenants: Brown V. Board of Education and the Unfulfilled Hopes for Racial Reform (Paperback) 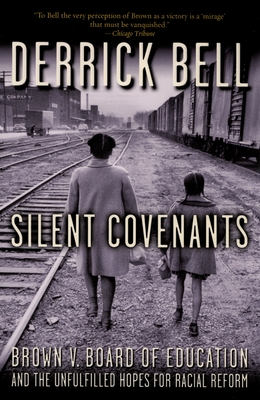 When the landmark Supreme Court case of Brown vs. Board of Education was handed down in 1954, many civil rights advocates believed that the decision, which declared public school segregation unconstitutional, would become the Holy Grail of racial justice. Fifty years later, despite its legal irrelevance and the racially separate and educationally ineffective state of public schooling for most black children, Brown is still viewed by many as the perfect precedent. Here, Derrick Bell shatters the shining image of this celebrated ruling. He notes that, despite the onerous burdens of segregation, many black schools functioned well and racial bigotry had not rendered blacks a damaged race. He maintains that, given what we now know about the pervasive nature of racism, the Court should have determined instead to rigorously enforce the equal component of the separate but equal standard. Racial policy, Bell maintains, is made through silent covenants--unspoken convergences of interest and involuntary sacrifices of rights--that ensure that policies conform to priorities set by policy-makers. Blacks and whites are the fortuitous winners or losers in these unspoken agreements. The experience with Brown, Bell urges, should teach us that meaningful progress in the quest for racial justice requires more than the assertion of harms. Strategies must recognize and utilize the interest-convergence factors that strongly influence racial policy decisions. In Silent Covenants, Bell condenses more than four decades of thought and action into a powerful and eye-opening book.

Derrick Bell is Visiting Professor of Law at New York University Law School. As an NAACP Legal Defense Fund lawyer, he handled and supervised hundreds of school desegregation cases during the 1960s. He is the author of several books, including And We Are Not Saved. He lives in New York City.