Negro with a Hat: The Rise and Fall of Marcus Garvey (Paperback) 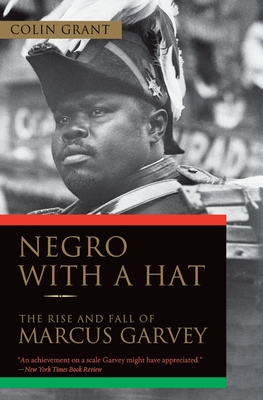 New in paperback, this groundbreaking biography captures the full sweep and epic dimensions of Marcus Garvey's life, the dazzling triumphs and the dreary exile. As Grant shows, Garvey was a man of contradictions: a self-educated, poetry-writing aesthete and unabashed propagandist, an admirer
of Lenin, and a dandy given to elaborate public displays. Above all, he was a shrewd promoter whose use of pageantry evoked a lost African civilization and fired the imagination of his followers. Negro With a Hat restores Garvey to his place as one of the founders of black nationalism and a key
figure of the 20th century. A searching, vivid, and (as the title suggests) complex account of Garvey's short but consequential life.
--Steve Hahn, The New Republic The story of Marcus Garvey, the charismatic and tireless black leader who had a meteoric rise and fall in the late 1910s and early '20s, makes for enthralling reading, and Garvey has found an engaging and objective biographer in Colin Grant.... Grant's book is not all politics, ideology, money and
lawsuits. It is also an engrossing social history.... Negro With a Hat is an achievement on a scale Garvey might have appreciated.
--New York Times Book Review Dazzling, definitive biography of the controversial activist who led the 1920s 'Back to Africa' movement.... Grant's learned passion for his subject shimmers on every page. A riveting and well-wrought volume that places Garvey solidly in the pantheon of important 20th-century black leaders.
--Kirkus Reviews (Starred Review) This splendid book is certain to become the definitive biography. Garvey was a dreamer and a doer; Grant captures the fascination of both.
--Publishers Weekly (Starred Review) Grant's strength lies in his ability to re-create political moods and offer compelling sketches of colorful individuals and their organizations.... An engaging and readable introduction to a complicated and contentious historical actor who, in his time, possessed a unique capacity to inspire
devotion and hatred, adulation and fear.
--Chicago Tribune A monumental, nuanced and broadly sympathetic portrait.
--Financial Times

Colin Grant is an independent historian who works for BBC Radio. The son of Jamaican parents, he lives in London.