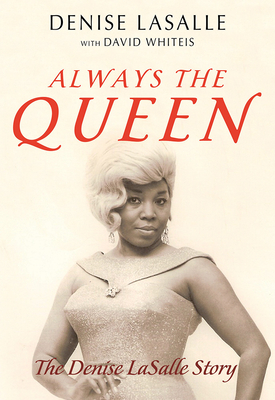 Denise LaSalle's journey took her from rural Mississippi to an unquestioned reign as the queen of soul-blues. From her early R&B classics to bold and bawdy demands for satisfaction, LaSalle updated the classic blueswoman's stance of powerful independence while her earthy lyrics about relationships connected with generations of female fans. Off-stage, she enjoyed ongoing success as a record label owner, entrepreneur, and genre-crossing songwriter.

As honest and no-nonsense as the artist herself, Always the Queen is LaSalle's in-her-own-words story of a lifetime in music. Moving to Chicago as a teen, LaSalle launched a career in gospel and blues that eventually led to the chart-topping 1971 smash ”Trapped by a Thing Called Love” and a string of R&B hits. She reinvented herself as a soul-blues artist as tastes changed and became a headliner on the revitalized southern soul circuit and at festivals nationwide and overseas. Revered for a tireless dedication to her music and fans, LaSalle continued to tour and record until shortly before her death.

Denise LaSalle (1934–2018) was a soul and blues singer-songwriter and businesswoman. Her songs include ”Trapped by a Thing Called Love,” ”Married, but Not to Each Other,” and the modern-day soul-blues standards ”A Lady in the Street,” ”Don't Jump My Pony,” and ”Someone Else Is Steppin' In.” LaSalle entered the Blues Hall of Fame in 2011 and the Rhythm & Blues Hall of Fame in 2015. David Whiteis is a journalist, writer, and educator living in Chicago. His books include Blues Legacy: Tradition and Innovation in Chicago and Southern Soul-Blues.

"One of the great achievements of Whiteis’ writing is that he’s managed to imbue the autobiography with a clear sense of her voice. Throughout the book it’s very easy to hear LaSalle speaking the words on the page . . . Denise LaSalle may be Always the Queen; however, her story is not about elevated privilege but one of self-determination, hard work, and a refusal to accept limitations." --Living Blues

"This is a vibrant portrait of a singular blues artist." --Booklist

"Even if you aren’t that familiar with LaSalle and only know a couple of her songs, her autobiography is a compelling page-turner, full of twists and turns that comprise her fascinating life and career, which parallel the timeline of music history and civil rights. Her struggles and determination are nothing less than inspiring." --Chicago Blues Guide

"Make sure you grab a couple of her recordings to listen to while reading this fascinating volume that comes highly recommended!" --Blues Blast Magazine

"LaSalle’s pride in being a songwriter, performer, and producer rings loudly, and she acknowledges that “God has been truly, truly good to me.” This is an empowering story, soulfully told." --Publishers Weekly

”I've known Denise LaSalle for many years personally, professionally, and spiritually. Her legacy will live on forever. I am blessed to have been a 'Knight in Her Majesty's court.' Long live the Queen.”—Latimore

"LaSalle is by turns rebellious, raunchy, worshipful, and tender. Readers will feel like they're listening to a woman nearing the end of her career share the lessons she learned on her musical journey." --Library Journal

"Captivating . . . . LaSalle testifies in Always the Queen, celebrating the freedom and strength of making her own music on her own terms. Though she may have left us, she’s given us this gift of her soulful voice and her moving ways of telling mesmerizing stories." --No Depression

"For those, who want to get acquainted with the human being behind the music, this is a good “X-ray” book. It brings Denise alive again. She speaks openly about all the issues, problems and also the good sides of her genre." --Soul Express

”Without the pioneering efforts of Denise LaSalle we probably wouldn't have many of the rap queens/divas we have today. In this book Denise tells all, from writing for romance rags as a teen to cannily carving out a singular career in the male-dominated music biz. Along the way, Denise runs into a string of characters—Ike Turner, Billy 'The Kid' Emerson, Millie Jackson, Bobby Rush, Willie Mitchell, even Bob Dylan. This book is as earthy, funny, and free of BS as one of LaSalle's songs, not to mention both eloquent and moving. David Whiteis, one of our most valuable music historians, clearly loves this Queen of the Blues and has crafted a memoir that would've made her proud. Essential reading for any R&B/soul/blues music lover.”—Jimmy McDonough, author of Soul Survivor: A Biography of Al Green

”Denise LaSalle went from picking cotton to singing gold. This intimate telling of her story takes us from the Mississippi farm to faraway places. Hers is a story of making it in the record business, hook and crook, firing on moxie, grit, luck—and a voice that always sounded like the truth. Like her singing, this book never loses its grit.”—Robert Gordon, author of Respect Yourself: Stax Records and the Soul Explosion