Bad Motherfucker: The Life and Movies of Samuel L. Jackson, the Coolest Man in Hollywood (Hardcover) 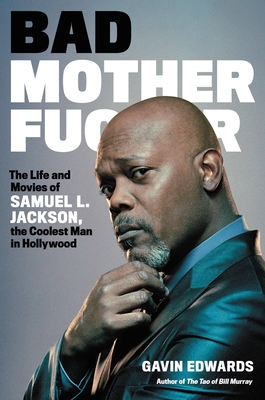 Bad Motherfucker: The Life and Movies of Samuel L. Jackson, the Coolest Man in Hollywood (Hardcover)


Usually Ships in 1-5 Days
A fascinating exploration and celebration of the life and work of the coolest man in Hollywood, Samuel L. Jackson—from his star-making turns in the films of Spike Lee and Quentin Tarantino to his ubiquitous roles in the Star Wars and Marvel franchises, not to mention the cult favorite Snakes on a Plane.

Samuel L. Jackson’s embodiment of cool isn’t just inspirational—it’s important. Bad Motherfucker lays out how his attitude intersects with his identity as a Black man, why being cool matters in the modern world, and how Jackson can guide us through the current cultural moment in which everyone is losing their cool. Edwards details Jackson’s fascinating personal history, from stuttering bookworm to gunrunning revolutionary to freebasing addict to A-list movie star.

Drawing on original reporting and interviews, the book explores not only the major events of Jackson’s life but also his obsessions: golf, kung fu movies, profanity. Bad Motherfucker
features a delectable filmography of Jackson’s movies—140 and counting!—and also includes new movie posters for many of Jackson’s greatest roles, reimagined by dozens of gifted artists and designers. The book provides a must-read road map through the vast territory of his on-screen career and more: a vivid portrait of Samuel L. Jackson’s essential self, as well as practical instructions, by example, for how to live and work and be.
Gavin Edwards is the New York Times bestselling author and editor of twelve books, including The Tao of Bill Murray: Real-Life Stories of Joy, Enlightenment, and Party Crashing and Kindness and Wonder: Why Mister Rogers Matters Now More Than Ever. He has also written for numerous publications including the New York Times, the Washington Post, Vogue, GQ, Details, and Rolling Stone. In the name of journalism, he has hiked the Great Wall of China, inhaled with Snoop Dogg, and participated in the world’s largest tomato fight. He lives in Charlotte, North Carolina, with his wife and two children.
“Bad Motherfucker is as cool and smooth as Samuel L. Jackson himself. Gavin Edwards is an insightful biographer and pop culture analyst who knows how to unearth key details that shine a new light on the most beloved of subjects.”—Jennifer Keishin Armstrong, author of Seinfeldia: How a Show About Nothing Changed Everything

“Samuel L. Jackson has blessed more than 100 films with his intensity and target-seeking line delivery—so much swagger, Marvel remodeled a superhero in his likeness—and Gavin Edwards’ page-turning almanac, crammed with insights, is the map for mainlining those thrills, the shepherd to guide your righteous ass through the valley of darkness.”—Sean Howe, author of Marvel Comics: The Untold Story

“There is no harder working man in Hollywood than Samuel L. Jackson, and Gavin Edwards’ addictive book is a deep dive into every twist and turn of his epic life and career—from Pulp Fiction and Jurassic Park to Snakes on a Plane.”—Andy Greene, author of The Office: The Untold Story of the Greatest Sitcom of the 2000s

“I didn’t know half this stuff—especially the golf stories—and I worked with the bad motherfucker! Sam Jackson is a national treasure.”
—Stel Pavlou, screenwriter of Formula 51 and host of Hunting Atlantis on Discovery

“A heady title that chronicles the life of a heady man….The beauty of Bad Motherf*cker is not just the content, but the actual setup and look of the book itself….The book reads smoothly, and there’s nothing like imagining the words said in Jackson’s pointed, ’70s funk speak….Edwards takes care to give credit where credit is due, which only speaks more highly of the subject of the book. Samuel L. Jackson is an enigmatic American dream and Bad Motherf*cker solidifies his title as the King of Cool.”—Black Girl Nerds

“A rollicking, expletive-filled look at the life and career of ‘The King of Cool’…. Edwards is especially adept in his handling of Jackson’s personal life, including his triumph over cocaine addiction and involvement in the civil rights movement. This highly entertaining consideration of the prolific actor is long overdue."
—Publishers Weekly (starred)

“Edwards, who has also written unconventional biographies of Bill Murray and Tom Hanks, breaks up the biographical chapters with reviews of Jackson’s film roles. His witty appraisals rate the movie as well as its ‘SLJ Factor,’ which measures the quality of Jackson’s performance and the amount of his screen time.”—LitHub

“A revealing look at the unlikely career trajectory of Samuel L. Jackson…. ‘In a fair world, I’d probably have three or four Oscars,’ Jackson has said. This entertaining book proves the point.”—Kirkus Reviews