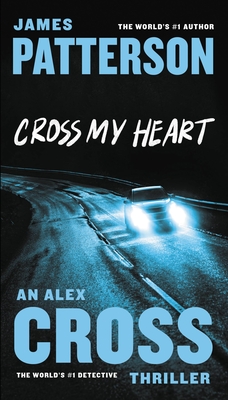 This is book number 19 in the An Alex Cross Thriller series.

The stakes are higher than ever for Alex Cross as he faces his most personal enemy yet: a criminal who threatens his family.
Detective Alex Cross is a family man at heart: nothing matters more to him than his children, his grandmother, and his wife Bree. His love of his family is his anchor, and gives him the strength to confront evil in his work. One man knows this deeply, and uses Alex's strength as a weapon against him in the most unsettling and unexpected novel of James Patterson's career.
When the ones Cross loves are in danger, he will do anything to protect them. But if he does anything to protect them, they will die.
Cross My Heart is the most powerful Alex Cross novel ever, propelled by the ever-ingenious mind of James Patterson, the world's #1 bestselling writer.
James Patterson has had more New York Times bestsellers than any other writer, ever, according to Guinness World Records. Since his first novel won the Edgar Award in 1977 James Patterson's books have sold more than 300 million copies. He is the author of the Alex Cross novels, the most popular detective series of the past twenty-five years, including Kiss the Girls and Along Came a Spider. He writes full-time and lives in Florida with his family.

"[Patterson's] books don't pussyfoot around when it comes to the villains. These are bad, bad people... [I, Alex Cross] is political, with a lot of intrigue in high places."
--- Al Roker, The Today Show

"I truly believe that James Patterson has an IV hooked up to his writing arm and Great Ideas, Great Plots, and Great Characters dribble constantly into his bloodstream...I, Alex Cross stuns."
--- TheReviewBroads.com

"The stakes are higher than ever before...More than a crime thriller, it's an absorbing family drama."
--- NightsandWeekends.com