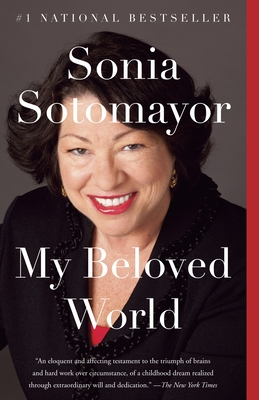 By Sonia Sotomayor
List Price: $17.00
Our Price: $14.45
(Save: $2.55 15%)
Usually Ships in 1-5 Days
#1 NATIONAL BESTSELLER • A “searching and emotionally intimate memoir” (The New York Times) told with a candor never before undertaken by a sitting Justice. This “powerful defense of empathy” (The Washington Post) is destined to become a classic of self-invention and self-discovery.

In this story of human triumph that “hums with hope and exhilaration” (NPR), she recounts her life from a Bronx housing project to the federal bench, a journey that offers an inspiring testament to her own extraordinary determination and the power of believing in oneself.

Here is the story of a precarious childhood, with an alcoholic father (who would die when she was nine) and a devoted but overburdened mother, and of the refuge a little girl took from the turmoil at home with her passionately spirited paternal grandmother. But it was when she was diagnosed with juvenile diabetes that the precocious Sonia recognized she must ultimately depend on herself. She would learn to give herself the insulin shots she needed to survive and soon imagined a path to a different life.

With only television characters for her professional role models, and little understanding of what was involved, she determined to become a lawyer, a dream that would sustain her on an unlikely course, from valedictorian of her high school class to the highest honors at Princeton, Yale Law School, the New York County District Attorney’s office, private practice, and appointment to the Federal District Court before the age of forty.

Along the way we see how she was shaped by her invaluable mentors, a failed marriage, and the modern version of extended family she has created from cherished friends and their children. Through her still-astonished eyes, America’s infinite possibilities are envisioned anew in this warm and honest book.

“A compelling and powerfully written memoir about identity and coming of age. . . . If the outlines of Justice Sotomayor’s life are well known by now, her searching and emotionally intimate memoir, My Beloved World, nonetheless has the power to surprise and move the reader. . . . This account of her life is revealing, keenly observed and deeply felt. . . . This insightful memoir underscores just how well Justice Sotomayor mastered the art of narrative. It’s an eloquent and affecting testament to the triumph of brains and hard work over circumstance, of a childhood dream realized through extraordinary will and dedication.”
—Michiko Kakutani, The New York Times

“The book delivers on its promise of intimacy in its depictions of Sotomayor’s family, the corner of Puerto Rican immigrant New York where she was raised and the link she feels to the island where she spent childhood summers. . . . This is a woman who knows where she comes from and has the force to bring you there. Sotomayor does this by being cleareyed about the flaws of the adults who raised her—she lets them be complicated. . . . ‘I’ve spent my whole life learning how to do things that were hard for me,’ Sotomayor tells an acquaintance when he asks whether becoming a judge will be difficult for her. Yes, she has. And by the time you close My Beloved World, you understand how she has mastered judging, too.”
—Emily Bazelon, The New York Times Book Review

“With buoyant humor and thoughtful candor, she recounts her rise from a crime-infested neighborhood in the South Bronx to the nation’s highest court. ‘I will be judged as a human being by what readers find here,’ Sotomayor writes. We, the jury in this case, find her irresistible.”
—John Wilwol, Washingtonian

“Sotomayor turns out to be a writer of depth and literary flair. . . . My Beloved World is steeped in vivid memories of New York City, and it is an exceptionally frank account of the challenges that she faced during her ascent from a public housing project to the court’s marble palace on First Street.”
—Adam Liptak, The New York Times

“You’ll see in Sotomayor a surprising wealth of candor, wit, and affection. No topic is off limits, not her diabetes, her father’s death, her divorce, or her cousin’s death from AIDS. Put the kettle on, reader, it’s time for some real talk with Titi Sonia. . . . The author shines in her passages on childhood, family, and self-discovery. Her magical portraits of loved ones bring to mind Sandra Cisneros’s The House on Mango Street; both authors bring a sense of childlike wonder and empathy to a world rarely seen in books, a Latin-American and womancentric world.”
—Grace Bello, Christian Science Monitor

“This is a page-turner, beautifully written and novelistic in its tale of family, love and triumph. It hums with hope and exhilaration. This is a story of human triumph.”
—Nina Totenberg, NPR

“Big-hearted. . . . A powerful defense of empathy. . . . She has spent her life imagining her way into the hearts of everyone around her. . . . Anyone wondering how a child raised in public housing, without speaking English, by an alcoholic father and a largely absent mother could become the first Latina on the Supreme Court will find the answer in these pages. It didn’t take just a village: It took a country.”
—Dahlia Lithwick, The Washington Post

“In a refreshing conversational style, Sotomayor tells her fascinating life story with the hope of providing ‘comfort, perhaps even inspiration’ to others, particularly children, who face hard times. ‘People who live in difficult circumstances,’ Sotomayor writes in her preface, ‘need to know that happy endings are possible.’”
—Jay Wexler, Boston Globe

“Classic Sotomayor: intelligent, gregarious and at times disarmingly personal. . . . A portrait of an underprivileged but brilliant young woman who makes her way into the American elite and does her best to reform it from the inside. . . . I certainly hope My Beloved World inspires readers to chase their dreams.”
—Jason Farago, NPR

“Vital, loving, and incisive. . . . In this revealing memoir, Supreme Court Justice Sotomayor candidly and gracefully recounts her formative years. Her memoir shows both her continued self-reliance and her passion for community.”
—Library Journal (Starred review)

“Justice Sotomayor recounts numerous obstacles and remarkable achievements in this personal and inspiring autobiography. . . . Readers across the board will be moved by this intimate look at the life of a justice.”
—Publishers Weekly

“Amazingly candid . . . an intimate and honest look at her extraordinary life and the support and blessings that propelled her forward.”
—Booklist (Starred review)