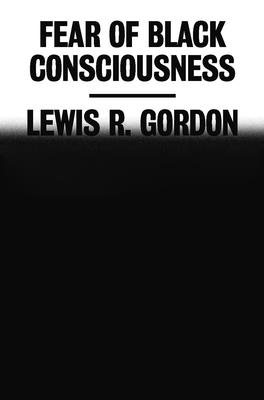 Lewis R. Gordon's Fear of Black Consciousness is a groundbreaking account of Black consciousness by a leading philosopher

In this original and penetrating work, Lewis R. Gordon, one of the leading scholars of Black existentialism and anti-Blackness, takes the reader on a journey through the historical development of racialized Blackness, the problems this kind of consciousness produces, and the many creative responses from Black and non-Black communities in contemporary struggles for dignity and freedom. Skillfully navigating a difficult and traumatic terrain, Gordon cuts through the mist of white narcissism and the versions of consciousness it perpetuates. He exposes the bad faith at the heart of many discussions about race and racism not only in America but across the globe, including those who think of themselves as "color blind." As Gordon reveals, these lies offer many white people an inherited sense of being extraordinary, a license to do as they please. But for many if not most Blacks, to live an ordinary life in a white-dominated society is an extraordinary achievement.

Informed by Gordon's life growing up in Jamaica and the Bronx, and taking as a touchstone the pandemic and the uprisings against police violence, Fear of Black Consciousness is a groundbreaking work that positions Black consciousness as a political commitment and creative practice, richly layered through art, love, and revolutionary action.

Lewis R. Gordon is an Afro-Jewish philosopher, political thinker, educator, and musician. He is a professor and head of the philosophy department at the University of Connecticut in Storrs. He has received accolades for his influential books and articles, many of which have been reprinted and translated around the world. He is Honorary President of the Global Center for Advanced Studies and a former president of the Caribbean Philosophical Association, for which he now serves as the chairperson of awards and global collaborations. Gordon's previous works include Disciplinary Decadence, Her Majesty's Other Children, and, with Jane Anna Gordon, Of Divine Warning.

“Lewis Gordon’s expansive philosophical engagement with the current moment—its histories and globalities, its politics and protests, its visual and sonic cultures—reminds us that the ultimate aim of Black freedom quests is, indeed, universal liberation.”
—Angela Y. Davis, Distinguished Professor Emerita, History of Consciousness and Feminist Studies at University of California, Santa Cruz

“Reading Fear of Black Consciousness had me nodding so often and so vigorously, I got a mild case of whiplash. With surgical precision, laser-sharp wit, and the eye of an artist, Lewis R. Gordon doesn’t just dissect race, racism, and racial thinking; he also offers a clarion call to embrace Black consciousness, to take political responsibility for decolonizing and transforming the world as it is.”
—Robin D. G. Kelley, author of Thelonious Monk: The Life and Times of an American Original

“Lewis R. Gordon is a thinker whose reflections on race have produced singular illuminations on our times. In Fear of Black Consciousness, he refines our conceptual understanding of how race consciousness is made and lived, and shows how reflection and survival are intertwined for all those who suffer from antiblack racism. Drawing on the history of philosophy and on a wide range of colonial histories, African popular culture, aboriginal histories, contemporary films, and stories, he shows the critical powers of creativity in dismantling racism and the making of a world where breath and love and existence become possible.”
—Judith Butler, author of The Force of Nonviolence

“This striking text offers the first systematic examination that I’ve seen of the epistemic dimensions of the universal illness that encompasses neoconservatism and neoliberalism. We learn the differences between a first-level, naive black consciousness and a revised and refined ‘Black consciousness,’ which critically reflects on this world and is capable of radically transforming it. You will want this book among your primary intellectual road supplies for the future.”
—Hortense J. Spillers, Gertrude Conaway Vanderbilt Professor of English Emerita at Vanderbilt University

"In Fear of Black Consciousness, we are invited to think through the deep racial contours of philosophical thought and notice how black ways of being animate new modes of living together. As atrocity, injury, white supremacy, and racial violence loom, Gordon holds steady a Fanonian outlook, theorizing black consciousness as the realization of possibility—that is, a sustained political commitment that recalculates the stakes of freedom."
—Katherine McKittrick, author of Demonic Grounds and Dear Science

"Fear of Black Consciousness deserves to be carefully studied . . . deeply engaging and captivating . . . [Lewis Gordon] is an ally of the revolutionary struggle for human freedom."
—Joel Wendland-Liu, People's World