Where Dogs Bark with Their Tails: A Novel (Hardcover) 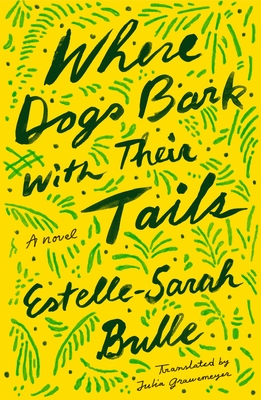 Where Dogs Bark with Their Tails: A Novel (Hardcover)

The tales of one family and their larger-than-many-lives sister, Antoine, weaves together the vibrant, epic story of Guadeloupe and its diaspora in Where Dogs Bark with Their Tails.

This is Antoine’s life story: an ill-fated romance between her upper-class mother and farmer father; a childhood spent deep in the countryside; the splendors and slums of Guadeloupe’s great city, Pointe-à-Pitre; the eruption of modernity; the rifts in a deeply hierarchical society under colonial rule—and the reasons she left it all behind. And to whom might she tell it?

A young woman born on the outskirts of Paris yearns to understand her lineage and métis identity. Her memories of occasional childhood visits are all that connects her to her father’s home. It is at her request that old Aunt Antoine, the eccentric and indomitable matriarch of the Ezechiels, unwinds the unforgettable tale of their family and with it a rich, layered account of Guadeloupe and its diaspora over the course of the twentieth century.

Spanning decades as it crosses the Atlantic, with lush language and vivid descriptions, Estelle-Sarah Bulle’s Where Dogs Bark with Their Tails examines the legacies of capitalism and colonialism, what it means to be caught between worlds, how it feels to lose our most beloved, and what stories might help us reconcile past, present, and future.

Estelle-Sarah Bulle was born in Créteil, France, in 1974 to a West Indian father and a Belgian mother. She studied in Paris and Lyon and now resides in Val-d’Oise, France. Where Dogs Bark with Their Tails is her first novel and was awarded the Prix Stanislas and the Prix Carbet de la Caraïbe et du Tout-Monde.

Julia Grawemeyer is an American educator, translator, and writer whose translations have been published by Schaffner Press and the Kenyon Review. She teaches French and intercultural communication to middle school students in Columbus, Ohio.

“A gorgeously written, enchanting meditation on the history, beauty, and resilience of an unforgettable family from Guadeloupe.”
—Naomi Jackson, author of The Star Side of Bird Hill

“A luminous novel about roots.”
—L’Humanité

“A melodic, endearing, and piquant novel with the flavor of true stories.”
—Le Figaro Littéraire

“[Estelle-Sarah Bulle] dips her pen in joyous ink, spiked with a zest of homespun Creole, to re-create the cheeky Guadeloupe of the twentieth century and the new towns around Paris, fertile soil for immigration.”
—L’Express