In Search of the Racial Frontier: African Americans in the American West 1528-1990 (Paperback) 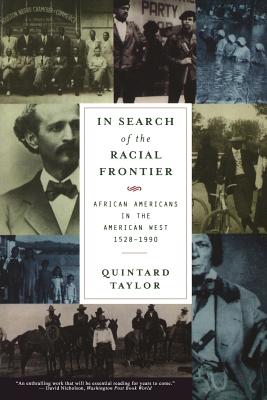 In Search of the Racial Frontier: African Americans in the American West 1528-1990 (Paperback)

"An enthralling work that will be essential reading for years to come." —David Nicholson, Washington Post

A landmark history of African Americans in the West, In Search of the Racial Frontier rescues the collective American consciousness from thinking solely of European pioneers when considering the exploration, settling, and conquest of the territory west of the Mississippi. From its surprising discussions of groups of African American wholly absorbed into Native American culture to illustrating how the largely forgotten role of blacks in the West helped contribute to everything from the Brown vs. Board of Education desegregation ruling to the rise of the Black Panther Party, Quintard Taylor fills a major void in American history and reminds us that the African American experience is unlimited by region or social status.

Quintard Taylor is the Scott and Dorothy Bullitt Emeritus Professor of American History at the University of Washington, Seattle and founder of BlackPast.org.
[Rich] in scope and scholarly detail?it will certainly stand as the definitive work on the subject for some time to come.
— James A. Miller - Boston Globe

[B]y far the most complete general history of blacks in the West.
— Scott L. Malcolmson - Newsday

Those looking for a solid overview of the African-American presence in our region would do well to let Quintard Taylor be their guide.
— John C. Walter - Seattle Times