All Eyes are Upon Us: Race and Politics from Boston to Brooklyn (Hardcover) 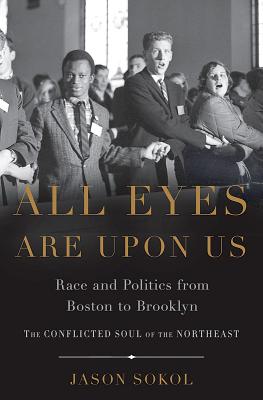 The Northeastern United States -- home to abolitionism and a refuge for blacks fleeing the Jim Crow South -- has had a long and celebrated history of racial equality and political liberalism. After World War II, the region appeared poised to continue this legacy, electing black politicians and rallying behind black athletes and cultural leaders. However, as historian Jason Sokol reveals in All Eyes Are Upon Us, these achievements obscured the harsh reality of a region riven by segregation and deep-seated racism.

White fans from across Brooklyn -- Irish, Jewish, and Italian -- came out to support Jackie Robinson when he broke baseball's color barrier with the Dodgers in 1947, even as the city's blacks were shunted into segregated neighborhoods. The African-American politician Ed Brooke won a senate seat in Massachusetts in 1966, when the state was 97% white, yet his political career was undone by the resistance to busing in Boston. Across the Northeast over the last half-century, blacks have encountered housing and employment discrimination as well as racial violence. But the gap between the northern ideal and the region's segregated reality left small but meaningful room for racial progress. Forced to reckon with the disparity between their racial practices and their racial preaching, blacks and whites forged interracial coalitions and demanded that the region live up to its promise of equal opportunity.

A revelatory account of the tumultuous modern history of race and politics in the Northeast, All Eyes Are Upon Us presents the Northeast as a microcosm of America as a whole: outwardly democratic, inwardly conflicted, but always striving to live up to its highest ideals.

Jason Sokol is the Arthur K. Whitcomb Associate Professor of History at the University of New Hampshire. The author of two critically acclaimed books on the history of the civil rights movement, Sokol lives in Newburyport, Massachusetts.

Daily Beast
“This groundbreaking history shows a civil rights movement beyond Birmingham, Selma, and Memphis. An important new voice in 20th-century history, Sokol expands the civil rights story to include segregated schools and racial politics in the Northeast.”

Boston Globe
“All Eyes Are Upon Us succeeds in excavating unfamiliar insights.”

Kansas City Star
“You will certainly come away with a better understanding of the continuum of racial discomfort that defines American society as it lurches between multi-racial progress and disturbing disappointment.”

History News Network
“All Eyes Are Upon Us offers equally fascinating portraits of several successful black politicians…a refreshing departure from recent histories of iconic American figures and epic events aimed for the best-seller lists. He also allows the perceptions of many participants in this history, major and minor, to shape and deepen his own.”

Kirkus
“With sharp research and insights, Sokol follows this blithe and self-congratulatory legacy through the election of President Barack Obama.”

New York Times Book Review
“A prescient book that offers a great deal to explain a national self-deception of stunning brevity…Ambitious, engrossing, analytically lucid…It is certainly possible that when this decade ends it will have confirmed the relevance of W.E.B. Du Bois's grim prophecy about America's everlasting racism. Jason Sokol's exceptional All Eyes Are Upon Us prepares us for just such a possibility.”

Washington Post
“A skilled storyteller, Sokol offers a series of interwoven case studies on topics that are sometimes familiar but, more often, not well known…Carefully balancing an appreciation of the symbolism of interracial politics with recognition of the forces that remain untouched by it, All Eyes Are Upon Us reminds us — if we need reminding — that the events unfolding in Ferguson, Mo., Staten Island and too many other communities are embedded in a complex and problematic history of both racial advances and obstacles to progress.”