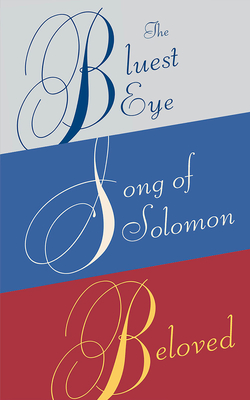 Staring unflinchingly into the abyss of slavery, Beloved transforms history into a story as powerful as Exodus and as intimate as a lullaby. This spellbinding novel tells the story of Sethe, a former slave who escapes to Ohio, but eighteen years later is still not free.

In The New York Times bestselling novel, The Bluest Eye, Pecola Breedlove, a young black girl, prays every day for beauty and yearns for normalcy, for the blond hair and blue eyes, that she believes will allow her to finally fit in. Yet as her dream grows more fervent, her life slowly starts to disintegrate in the face of adversity and strife.

With Song of Solomon, Morrison transfigures the coming-of-age story as she follows Milkman Dead from his rustbelt city to the place of his family's origins, introducing an entire cast of strivers and seeresses, liars and assassins, the inhabitants of a fully realized black world.

This beautifully designed slipcase will make the perfect holiday and perennial gift.

TONI MORRISON—who died in 2019—wrote eleven novels, from The Bluest Eye (1970) to God Help the Child (2015). She received the Pulitzer Prize and the National Book Critics Circle Award. In 1993 she was awarded the Nobel Prize in Literature.