Help Is on the Way: Stay Up and Live Your Truth (Hardcover) 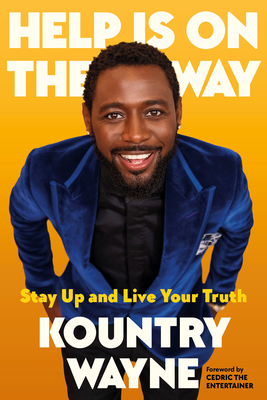 Help Is on the Way: Stay Up and Live Your Truth (Hardcover)

By Kountry Wayne, Mim Eichler Rivas (With), Cedric the Entertainer (Foreword by)
List Price: $27.00
Our Price: $21.60
(Save: $5.40 20%)
Not Yet Published
Comedic superstar and internet entrepreneur Kountry Wayne’s unflinchingly honest, often outrageous, but always hopeful and hard-won lessons on having faith.

Before he was one of Variety’s "10 Comics to Watch" and a comedy sensation followed by millions, Kountry Wayne found few legit options for a poor Black man in a small-minded Georgia town. For many years he resorted to running his own game, but thankfully friends and family (and one patient probation officer) convinced him that he had talent beyond hustling. Once he began posting short sketches based on his on-the-nose Southern Black truths, wildly funny observations, and inspirational guidance, he became an almost overnight hit.

Now a proud father of ten, Kountry Wayne is on a mission to give back. By sharing his seemingly impossible story, he hopes to help others see that no matter where you started from or how stuck you feel right now, the possibilities for living a rich, full life are limitless. Trust that the universe has got you!

His Kountry Lessons include:

Whether you are simply looking for a laugh to boost your spirit or some real guidance to help you in life, love, or money, Kountry Wayne has got you covered.
Wayne "Kountry Wayne" Colley has earned a loyal following with his widely popular digital sketches and hilarious standup, generating an extraordinary amount of buzz as one of comedy’s rising stars. With his humble roots and unbridled energy, Wayne continues to build his audience with cutting-edge yet clean material whose appeal transcends cultural lines.