Miss Me with That: Hot Takes, Helpful Tidbits, and a Few Hard Truths (Hardcover) 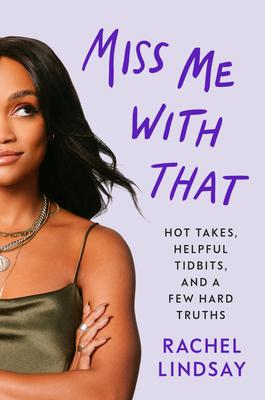 Miss Me with That: Hot Takes, Helpful Tidbits, and a Few Hard Truths (Hardcover)


Usually Ships in 1-5 Days
A candid, witty, and inspiring collection of essays from The Bachelor’s first Black Bachelorette, exploring everything from relationships and love to politics and race

“The Bachelor gave me an opportunity, but I created my own happy ending.”

Rachel Lindsay rose to prominence as The Bachelor’s first Black Bachelorette and has since become one of the franchise’s most well-known figures—and outspoken critics. But there has always been more to Lindsay than meets the eye, and in this book, she finally tells her own story, in her own words.

In wide-ranging essays, Lindsay opens up about her experience on ABC’s hit show and reveals everything about her life off-camera, from a childhood growing up in Dallas, Texas, as the daughter of a U.S. District Judge, to her disastrous dating life prior to appearing on The Bachelor, to her career in law, and the decision to become a reality-TV contestant. She also brings a sharp wit and keen intellect to weigh in on issues such as the lack of diversity in reality television and the importance of political engagement, protest, and the Black Lives Matter movement.

Told in the down-to-earth, no-nonsense voice she’s become known for, Lindsay’s book of essays provides an intimate look at the life of one of reality TV’s most beloved stars, as well as advice and inspiration that will make her a role model for anyone who has ever struggled to find their way in love and life. As she says, “Contrary to popular belief, the best gift I ever received was not a wedding ring. It was the permission I gave myself to be imperfect.” And if you don’t believe her, you know the saying: Miss me with that.
Rachel Lindsay is an attorney, media personality, podcaster, and speaker. She is currently a correspondent for Extra and cohosts The Ringer’s Higher Learning podcast. Prior to her media career, she practiced law at Cooper & Scully, P.C., in Dallas. Lindsay has an exclusive newsletter called “Honestly, Rach” on Facebook Bulletin where she talks about love, life, career, friendships, and social issues. An avid sports fan, Lindsay enjoys music, dancing, exercising, reading, and spending time with husband, Bryan, her dog, Copper, and her extended family. Lindsay is also an ambassador for the College Football Playoff Foundation and a member of the University of Texas at Austin College of Education Advisory Council. She lives in Los Angeles.
“In Miss Me with That, Rachel Lindsay shares her full story for the first time, letting readers inside her world both inside and outside of the Bachelor franchise.”—Marie Claire

“In this revealing debut, erstwhile Bachelorette Lindsay offers a blistering critique of the Bachelor franchise while reflecting on her racial identity, turbulent relationships, and life as a reality-TV personality. . . . Lindsay’s many fans will devour this entertaining exposé.”—Publishers Weekly