The Age of Garvey: How a Jamaican Activist Created a Mass Movement and Changed Global Black Politics (America in the World #18) (Hardcover) 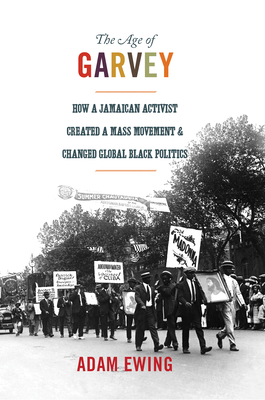 The Age of Garvey: How a Jamaican Activist Created a Mass Movement and Changed Global Black Politics (America in the World #18) (Hardcover)

Jamaican activist Marcus Garvey (1887-1940) organized the Universal Negro Improvement Association in Harlem in 1917. By the early 1920s, his program of African liberation and racial uplift had attracted millions of supporters, both in the United States and abroad. The Age of Garvey presents an expansive global history of the movement that came to be known as Garveyism. Offering a groundbreaking new interpretation of global black politics between the First and Second World Wars, Adam Ewing charts Garveyism's emergence, its remarkable global transmission, and its influence in the responses among African descendants to white supremacy and colonial rule in Africa, the Caribbean, and the United States. Delving into the organizing work and political approach of Garvey and his followers, Ewing shows that Garveyism emerged from a rich tradition of pan-African politics that had established, by the First World War, lines of communication among black intellectuals on both sides of the Atlantic. Garvey's legacy was to reengineer this tradition as a vibrant and multifaceted mass politics. Ewing looks at the people who enabled Garveyism's global spread, including labor activists in the Caribbean and Central America, community organizers in the urban and rural United States, millennial religious revivalists in central and southern Africa, welfare associations and independent church activists in Malawi and Zambia, and an emerging generation of Kikuyu leadership in central Kenya. Moving away from the images of quixotic business schemes and repatriation efforts, The Age of Garvey demonstrates the consequences of Garveyism's international presence and provides a dynamic and unified framework for understanding the movement, during the interwar years and beyond.
Adam Ewing is assistant professor of African American studies at Virginia Commonwealth University.