Black Men and Depression: Saving our Lives, Healing our Families and Friends (Paperback) 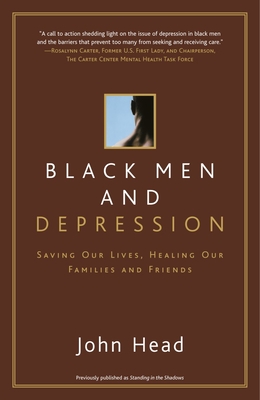 “A call to action shedding light on the issue of depression in black men and the barriers that prevent too many from seeking and receiving care.”—Rosalynn Carter, former U.S. First Lady, and chairperson, The Carter Center Mental Health Task Force

In mainstream society depression and mental illness are still somewhat taboo subjects; in the black community they are topics that are almost completely shrouded in secrecy. As a result, millions of black men are suffering in silence or getting treatment only in extreme circumstances—in emergency rooms, homeless shelters, and prisons. The neglect of emotional disorders among men in the black community is nothing less than racial suicide.

In this groundbreaking book, veteran journalist and award-winning author John Head argues that the problem can be traced back to the time of slavery, when it was believed that blacks were unable to feel inner pain because they had no psyche. This myth has damaged generations of African American men and their families, creating a society that blames black men for being violent and aggressive without considering that depression might be a root cause.

Black Men and Depression challenges the African American community and the psychiatric community to end the suffering of black men, and address what can be done by loved ones to help those who need it most.

Previously published as Standing in the Shadows

JOHN HEAD is a former mental health reporter and features writer for the Atlanta Journal-Constitution, and a former reporter for USA TODAY and the Detroit Free Press. His first book, We Are the Land’s: The Biography of a Homeplace, was named best memoir by the Georgia Writers Association in 1999.

"A call to action shedding light on the issue of depression in black men and the barriers that prevent too many from seeking and receiving car."

"Standing in the Shadows is a brave, unblinking look at what it is like to be an African American man with depression.  John Head's insightful analysis of the connection between racism and this illness should be required  reading for everyone who cares that African American men are often absent from their families, are in jails and prisons in disproportionate numbers, and die at an alarming rates from suicide.”

"John Head deftly takes us on a personal and cultural journey into the nature of depression and the social stigmas that surround it. Standing in the Shadows is an insightful, compelling, and practical guide."

"This book does not haggle with statistics and scientific discoveries . . . .it literally keeps the topic of depression and black men honest by taking us through a progressive journey that helps us understand the real hurdles. Before you delve into any medical journal . . . read this book first so that you will have a deeper understanding of the topic and develop a good foundation."

-- Donna Holland Barnes, Ph.D, resident and co-founder of the National Organization for People of Color Against Suicide and assistant professor in
the department of psychiatry at Howard University.

"Neither a polemic nor a weepy tell-all, Standing in the Shadows is a sobering look at what the world's most common mental illness is doing to a big chunk of our population—with well-researched words of hope and help for those men and the people who love them."

—Tracy Thompson, author of The Beast: A Reckoning with Depression

“John Head's Standing in the Shadows is a "must read" for the black man suffering from the lingering, tormenting blues and for anyone who knows him. Head makes the experience of depression real in heartfelt, well-crafted vignettes that give substance to his demand that we acknowledge, name, understand, and do something to ease the psychic pain that many black men suffer in relative silence.”