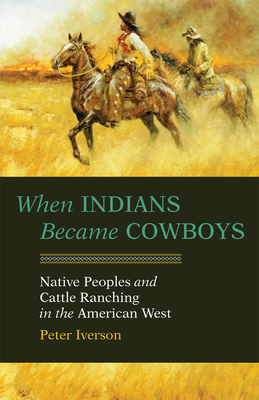 In this book on Indian cattle ranching, Peter Iverson describes a way of life that has been both economically viable and socially and culturally rewarding. Thus an Indian rancher can demonstrate his generosity and his concern for the well-being of others by giving cattle or beef to relatives, or by feeding people at a celebration. An expert rider possesses a skill appreciated by others. A rancher who raises prime cattle demonstrates that Indians can compete in an activity that dominates the surrounding non-Indian society.

Focusing on the northern plains and the Southwest, Iverson traces the rise and fall of individual and tribal cattle industries against the backdrop of changing federal Indian policies. He describes the Indian Bureau's inability to recognize that most nineteenth-century reservations were better suited to ranching than farming. Even though allotment and leasing stifled ranching, livestock became symbols and ranching a new means of resisting, adapting, and living--for remaining Native.

In the twentieth century, allotment, leasing, non-Indian competition, and a changing regional economy have limited the long-term economic success of Indian ranching. Although the New Deal era saw some marked improvements in Native ranching operations, Iverson suggests that since the 1960s, Indian and non-Indian ranchers alike have faced the same dilemma that confronted Indians in the nineteenth century: they are surrounded by a society that does not understand them and has different priorities for their land. Cattle ranching is no more likely to disappear than are the Indian communities themselves, but cowboys and Indians, who share a common sense of place and tradition, also share an uncertain future.