"In a Single Garment of Destiny": A Global Vision of Justice (King Legacy #8) (Paperback) 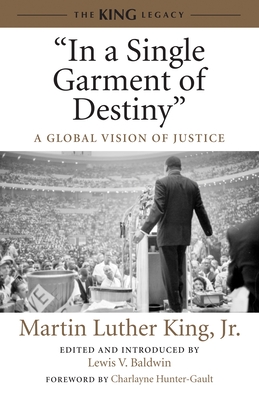 "In a Single Garment of Destiny": A Global Vision of Justice (King Legacy #8) (Paperback)

This is book number 8 in the King Legacy series.

An unprecedented and timely collection that captures the global vision of Dr. King—in his own words

Too many people continue to think of Martin Luther King, Jr., only as “a Southern civil rights leader” or “an American Gandhi,” thus ignoring his impact on poor and oppressed people around the world. "In a Single Garment of Destiny" is the first book to treat King's positions on global liberation struggles through the prism of his own words and activities.

From the pages of this extraordinary collection, Dr. King emerges not only as an advocate for global human rights but also as a towering figure who collaborated with Eleanor Roosevelt, Albert J. Luthuli, Thich Nhat Hanh, and other national and international figures in addressing a multitude of issues we still struggle with today: from racism, poverty, and war to religious bigotry and intolerance. Introduced and edited by distinguished King scholar Lewis Baldwin, this volume breaks new ground in our understanding of King.
Lewis V. Baldwin is professor of religious studies at Vanderbilt University and the author of The Voice of Conscience: The Church in the Mind of Martin Luther King, Jr., There Is a Balm in Gilead: The Cultural Roots of Martin Luther King, Jr., and Never to Leave Us Alone: The Prayer Life of Martin Luther King, Jr. He lives in Nashville, Tennessee.

Charlayne Hunter-Gault is an author, journalist, and foreign correspondent for National Public Radio. In 1961, she was one of two black students to desegregate the University of Georgia.