Gather Together in My Name (Paperback) 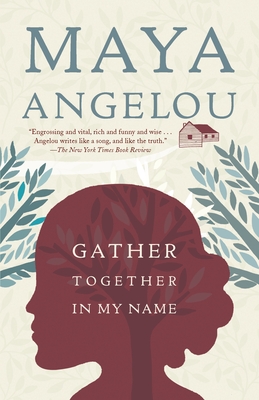 Gather Together in My Name (Paperback)


Usually Ships in 1-5 Days
In this second volume of her poignant autobiographical series, Maya Angelou powerfully captures the struggles and triumphs of her passionate life with dignity, wisdom, humor, and humanity.

“A curiously heartening story in which decency, honor, truth, love do exist, imperfectly, fractionally and flickeringly, not in some Platonic realm of the ideal, but in the flawed lives of real men and women.”—The Washington Post

Gather Together in My Name continues Maya Angelou’s personal story, begun so unforgettably in I Know Why the Caged Bird Sings. The time is the end of World War II and there is a sense of optimism everywhere. Maya Angelou, still in her teens, has given birth to a son. But the next few years are difficult ones as she tries to find a place in the world for herself and her child. She goes from job to job–and from man to man. She tries to return home–back to Stamps, Arkansas–but discovers that she is no longer part of that world. Then Maya’s life takes a dramatic turn, and she faces new challenges and temptations.
Maya Angelou was raised in Stamps, Arkansas. In addition to her bestselling autobiographies, including I Know Why the Caged Bird Sings and The Heart of a Woman, she wrote numerous volumes of poetry, among them Phenomenal Woman, And Still I Rise, On the Pulse of Morning, and Mother. Maya Angelou died in 2014.
“Engrossing and vital, rich and funny and wise . . . Angelou writes like a song, and like the truth.”—The New York Times Book Review

“The book is a gem. It presents a descriptive picture of the texture of the lives and times of many black people in the late forties before the dawn of civil rights. It is so insightful and funny-sad, you catch yourself remembering your own young adulthood.”—Chicago Tribune

“Angelou’s stature as a writer, a woman, a black, grows, walks tall.”—Kirkus Reviews

"This is the story of a great heroine who knows the meaning of a struggle and never loses her pride or dignity. Indeed, her story makes me proud of the human race." —John Oliver Killens