Black Greek-Letter Organizations in the Twenty-First Century: Our Fight Has Just Begun (Hardcover) 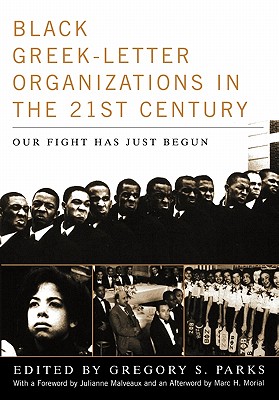 Black Greek-Letter Organizations in the Twenty-First Century: Our Fight Has Just Begun (Hardcover)

During the twentieth century, black Greek-Letter organizations (BGLOs) united college students dedicated to excellence, fostered kinship, and uplifted African Americans. Members of these organizations include remarkable and influential individuals such as Martin Luther King Jr., Congresswoman Barbara Jordan, novelist Toni Morrison, and Wall Street pioneer Reginald F. Lewis. Despite the profound influence of these groups, many now question the continuing relevance of BGLOs, arguing that their golden age has passed. Partly because of their perceived link to hip-hop culture, black fraternities and sororities have been unfairly reduced to a media stereotype -- a world of hazing without any real substance. The general public knows very little about BGLOs, and surprisingly the members themselves often do not have a thorough understanding of their history and culture or of the issues currently facing their organizations. To foster a greater engagement with the history and contributions of BGLOs, Black Greek-Letter Organizations in the Twenty-first Century: Our Fight Has Just Begun brings together an impressive group of authors to explore the contributions and continuing possibilities of BGLOs and their members. Editor Gregory S. Parks and the contributing authors provide historical context for the development of BGLOs, exploring their service activities as well as their relationships with other prominent African American institutions. The book examines BGLOs' responses to a number of contemporary issues, including non-black membership, homosexuality within BGLOs, and the perception of BGLOs as educated gangs. As illustrated by the organized response of BGLO members to the racial injustice they observed in Jena, Louisiana, these organizations still have a vital mission. Both internally and externally, BGLOs struggle to forge a relevant identity for the new century. Internally, these groups wrestle with many issues, including hazing, homophobia, petty intergroup competition, and the difficulty of bridging the divide between college and alumni members. Externally, BGLOs face the challenge of rededicating themselves to their communities and leading an aggressive campaign against modern forms of racism, sexism, and other types of fear-driven behavior. By embracing the history of these organizations and exploring their continuing viability and relevance, Black Greek-Letter Organizations in the Twenty-first Century demonstrates that BGLOs can create a positive and enduring future and that their most important work lies ahead.

Gregory S. Parks is coeditor of African American Fraternities and Sororities: The Legacy and the Vision. A life member of Alpha Phi Alpha Fraternity, Inc., he received his PhD in psychology from the University of Kentucky and is a JD candidate at Cornell Law School.