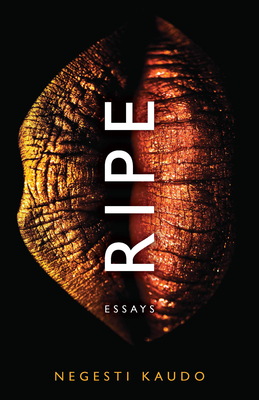 
Usually Ships in 1-5 Days
“A deeply intimate meditation on millennial Black womanhood and a righteous indictment of how this country treats Black girls and women.” —Kirkus (starred review)
A LitHub Most Anticipated Book of 2022

“Emotional range without consequence,” Negesti Kaudo writes in her debut collection, Ripe, is a privilege of whiteness. In these essays, she fights back, exhorting readers to follow her through fury, grief, love, and hope as she confronts what it means to own her Blackness and her body in contemporary America. A scathing and nuanced cultural critic, she disentangles intersections of race, class, pop culture, size, sexuality, and more in spaces where she always seems to be either too Black or not Black enough. From attending private school as a poor Black student to the evolution of her hair routine to being fat and sexual when society says she should be neither, Kaudo overlooks nothing as she names the ways that white America simultaneously denigrates and steals Black culture. Most of all, she writes against the idea that a Black woman’s anger makes her an “angry Black woman,” claiming full emotional range as her birthright and as a tool against injustice on her quest to find herself no matter how uncomfortable the journey.
Negesti Kaudo is a Midwestern essayist who holds an MFA in creative nonfiction from Columbia College Chicago and has worked as a copywriter, a sex toy columnist, and an adjunct writing instructor. Her work has appeared in Fourth Genre, Best American Experimental Writing, and elsewhere. Ripe is her first book.
“With unflinching honesty and vulnerability, Kaudo documents her journey to becoming her bolder self. … Kaudo is a highly self-aware work in progress who doesn’t have all the answers, but she has chosen the most interesting questions to grapple with. The result is a deeply intimate meditation on millennial Black womanhood and a righteous indictment of how this country treats Black girls and women. Timely, unapologetic, and intense, in all the best ways.” —Kirkus (starred review)

​“Ripe is a testament to the expansiveness of Black life—a very specific expansiveness that offers generous glimpses into Black womanhood, Black Midwesternness, Black place, and placelessness. This is a memorable book, an exploration written by a thoughtful and curious tour guide in the museum of her own life.” —Hanif Abdurraqib

“A debut essay collection from an exciting new voice … joins the ranks of other recent collections on intersectionality such as Hood Feminism and Against White Feminism, a must-read contemporary canon.” —Eliza Smith, Lit Hub