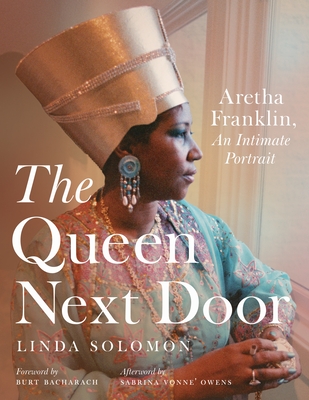 Aretha was private. I respected this and she trusted me. Linda Solomon met Aretha Franklin in 1983 when she was just beginning her career as a photojournalist and newspaper columnist. Franklin's brother and business manager arranged for Solomon to capture the singer's major career events-just as she was coming back home to Detroit from California-while Franklin requested that Solomon document everything else. Everything. And she did just that. What developed over these years of photographing birthday and Christmas parties in her home, annual celebrity galas, private backstage moments during national awards ceremonies, photo shoots with the iconic pink Cadillac, and more was a friendship between two women who grew to enjoy and respect one another.

The Queen Next Door: Aretha Franklin, An Intimate Portrait is a book full of firsts as Solomon was invited not only to capture historical events in Aretha's music career showcasing Detroit but to join in with the Franklin family's most intimate and cherished moments in her beloved hometown. From performance rehearsals with James Brown to off-camera shenanigans while filming a music video with the Rolling Stones, from her first television special to her first time performing with the Detroit Symphony Orchestra, to her last performance with her sisters at her father's church and her son's college graduation celebration. In the book's afterword, Sabrina Vonne' Owens, Franklin's niece, honors her aunt, a woman who was an overwhelming supporter of civil rights, women's rights, and fundraising campaigns that helped to benefit her hometown. There was a time in her career-when Franklin was more in demand than ever before-when she insisted that if someone wanted her to perform, they had to come to Detroit. During this time all of her major concerts, national television specials, music videos, and commercials would happen in Detroit. Aretha Franklin showed her respect for the people in the city who championed her from the very beginning when she started singing as a young girl in the church choir. Franklin used to say, I am the lady next door when I am not on stage. The Queen Next Door offers fans a personal and unseen look at an extraordinary woman in her most natural moments-both regal and intimate-and highlights her devotion to her family and her hometown Detroit-forever and ever.
Linda Solomon is an award-winning photojournalist and author. She is known for her natural light portraits ofcelebrities and her nonprofit foundation, Pictures of Hope, which provides cameras to children living in shelters inthe United States. Linda is a member of the prestigious Michigan Journalism Hall of Fame and the author of TheKey: Celebrated People Unlock Their Secrets to Life.