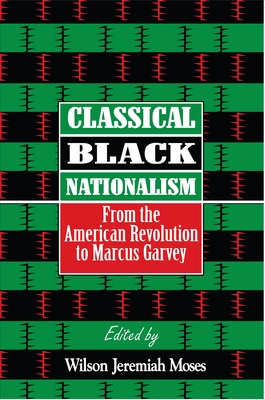 The goal of early black nationalists was the return of the African-American population to Africa to create a sovereign nation-state and to formulate an ideological basis for a concept of national culture. Most early black nationalists believed that this return was directed by the hand of God. Moses examines the evolution of black nationalist thought through several phases, from its proto-nationalisic phase in the late 1700s through a hiatus in the 1830s, through its flourishing in the 1850s, its eventual eclipse in the 1870s, and its resurgence in the Garvey movement of the 1920s.

Moses provides us with documents that illustrate the motivations of both whites and blacks as they sought the removal of the black population. We hear from Thomas Jefferson, who held that it was self-evident that black and white populations could not intermingle on an equal basis or merge to form one happy society, and who toyed with the idea of a mass deportation of the black American population. We see that the profit motive is an important motive behind any nationalist movement in the letters between African American capitalists Paul Cuffe and James Forten. Among the more difficult selections to classify in this collection, Robert Alexander Young's Ethiopian Manifesto prophesied the coming of a prophetic liberator of the African race. The Christian nature of nineteenth century black nationalism is evident in Blyden's The Call of Providence.

Moses rounds out the volume with contributions from more well- known voices such as those of Marcus Garvey, W.E.B. Dubois, and others. Classical Black Nationalism will serve as a point of departure for anyone interested in gaining a foundational knowledge of the disparate voices behind this often discussed but seldom understood movement.

Wilson Jeremiah Moses is Professor of History at The Pennsylvania State University. His previous books include "The Golden Age of Black Nationalism" and "Alexander Crummell: A Study in Civilization and Discontent."