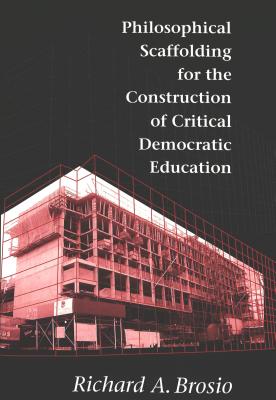 This is book number 75 in the Counterpoints series.

This book offers description and analysis of philosophies that can provide scaffolding and justification for the construction of critical, democratic, educational theory and practice. The reader is presented with a broad, historical treatment of ideas in their social, political, economic, and educational contexts; moreover, the perennial quest for certainty is contrasted with those who have decided it has always been an unhappy, unsuccessful, and dangerous quest. Richard A. Brosio argues that the scaffolding and building materials for the construction of critical, democratic education are best provided by those thinkers who recognize epistemological uncertainty, as well as the need for a broadly inclusive human attempt to make sense of our experiences, education, and world. The cast of characters includes classical Greeks, Marx, Dewey, existentialists, liberationists, Freire, politics of identity thinkers, and postmodernists - along with a touch of green.
The Author: Richard A. Brosio is Professor of Social Foundations of Education at Ball State University. He received his B.A. in history and his Ph.D. in social foundations of education at the University of Michigan. He is the author of numerous articles, as well as monographs on John Dewey and The Frankfurt School, and A Radical Democratic Critique of Capitalist Education - a book that was a recipient of the American Educational Studies Association's Critics' Choice Award in 1994. In 1998 Dr. Brosio was honored with The James and Helen Merritt Invited Speaker Award for Outstanding Contributions to the Philosophy of Education.