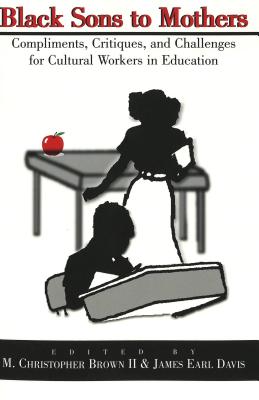 This is book number 107 in the Counterpoints series.

Black Sons to Mothers is the critical site where African American male scholars explore the meanings and connections of the lives of black boys/men. This book offers literary, scholarly, and personal space to interrogate the seemingly elusive intersection of race and gender. Each chapter in the book is offered in one of two voices - one that speaks to teachers as cultural workers and one that represents individual transformation into the cultural space of mothering. This book's intent is to both question black men's constructions as sons (cultural offspring) and to engage in the project of representing mothering as cultural work and, specifically, the role of black men in this work.
Because the discourse on the role performance of black boys/men is steeped in the hegemonic rhetoric of traditional constructions of masculinity, that discourse fails to sensibly represent and elaborate on the diversity and complexity of their lives and relations, particularly in the academic enterprise. As such, Black Sons to Mothers attempts to recontextualize the discourse surrounding the cultural places where the identities of black boys/men are shaped and explores how the politics and constructions of manhood are informed and enforced in school settings.
In Black Sons to Mothers, the research subject of extrapolation is the oppressed and/or marginalized group. In opposition to deficit model inquiry, the research on white males is not being applied to black boys/men, but the research on black boys/men is being applied to all students. The black male student is at the center of a discourse that is not about a pathology, dysfunction, at-riskness, or special education. This book's discourse is epigenetic in that it advances a more complex understanding of schooling and cultural work. This understanding is not solely about black boys/men, but about the cornerstone of cultural work - (un)learning.
The Editors: M. Christopher Brown II teaches in the Department of Educational Organization and Leadership at the University of Illinois at Urbana-Champaign. He received his Ph.D. in Higher Education with cognates in Political Theory and Jurisprudence from The Pennsylvania State University. James Earl Davis teaches in the School of Education at the University of Delaware. He received his Ph.D. in Social Policy and Evaluation from Cornell University.