The Politics of Curricular Change: Race, Hegemony, and Power in Education (Counterpoints #131) (Paperback) 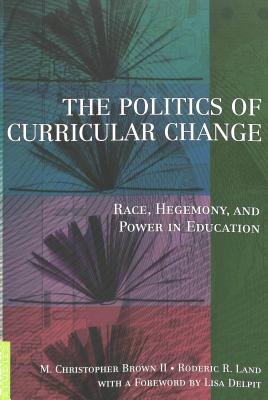 The Politics of Curricular Change: Race, Hegemony, and Power in Education (Counterpoints #131) (Paperback)

This is book number 131 in the Counterpoints series.

As different and significant peoples have joined its population, the United States has undergone various conceptions of education - its definition, purpose, content, and pedagogy, in primary and secondary schools as well as colleges and universities - and education for the twenty-first century will require curricular change. The quest for an inclusive curriculum - and the politics involved in that quest - is the continuing pursuit of a strategem that both acknowledges and utilizes the racially, ethnically, politically, economically, and linguistically diverse groups, along with the dominant majority, in order to support and maintain diversity, tolerance, and, ultimately, community.
The Politics of Curricular Change fills an important void in the existing literature on the relationship of multicultural curricular change to race, hegemony, and power as independent constructs. Given the scant amount of research on how these constructs serve as facilitators of curricular change, this book is timely in its reassessment of the requirements of multiculturalism, and will appeal to national- and state-level policy makers, higher education officials, administrators, faculty, researchers, and the national citizenry.
The Editors: M. Christopher Brown II is Executive Director and Chief Research Scientist of the Frederick D. Patterson Research Institute of the United Negro College Fund, and Associate Professor of Education and Senior Research Associate in the Center for the Study of Higher Education at The Pennsylvania State University. Dr. Brown is the author or co-author of more than fifty journal articles, book chapters, monographs, and publications related to education and society. He is the author/editor of four books: The Quest to Define Collegiate Desegregation; Organization and Governance in Higher Education; Black Sons to Mothers (with James Earl Davis; Peter Lang 2000); and Black Colleges (with Kassie Freeman). He has lectured and/or presented scholarship in various countries in Africa, Australia, Europe, and North America. Dr. Brown received his Ph.D. in higher education with cognates in public administration and political science from The Pennsylvania State University. Roderic R. Land, former Illinois Consortium Educational Opportunity Fellow, is a doctoral candidate in the Department of Educational Policy Studies at the University of Illinois at Urbana-Champaign. His research analyzes the experiences of African American professors in predominantly white classroom settings, an area of research that attempts to illuminate issues of power relations, identity development, and race that are implicit within this environment. Land holds an M.A. in human development and education from the University of Illinois-Springfield with an emphasis in racial identity development of African-American adolescents.