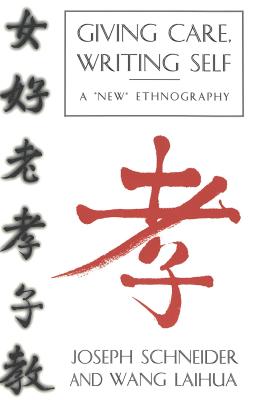 This is book number 132 in the Counterpoints series.

The authors of this unconventional social science text draw on the division and difference in late-twentieth-century human science to write a critical, reflexive ethnography. The book's substantive focus is, simultaneously, the caregiving work and subjectivities that can develop around an ill parent living at home in urban North China at the end of the century, as well as a recurrent decentering of the authoritative, ethnographic voice and vision that would produce a conventional, centered narrative of these caregiving and subjectivity-producing practices and spaces. Schneider and Wang seek to write themselves into this text, both as would-be but skeptical filial sons, and as sociologists who are variously disloyal to the scientific traditions that they would use to ground their own personal/professional selves.
The Authors: Joseph Schneider is Professor of Sociology at Drake University in Des Moines. He has written on the medicalization of deviance, the experience of chronic illness, and the social constructionist theory of social problems. He teaches masculinity in popular film and the moral topography of the Chinese Cultural Revolution. Wang Laihua is Senior Research Fellow and Director of the Public Opinion Research Center at the Tianjin Academy of Social Sciences in Tianjin. He has published primarily from research on the lives of elderly people in China and on the welfare implications of the post-1980s reform changes in the structure of employment.