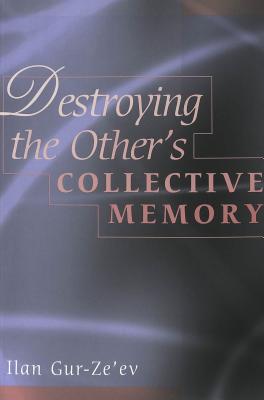 This is book number 141 in the Counterpoints series.

Destroying the Other's Collective Memory addresses education as the violence that constitutes the passions, conceptual apparatuses, consciousnesses, possibilities, limitations, and aims of subjects and collectives. The mutual quests for control, productivization, and destruction of the Israeli and Palestinian passions, concepts, identities, and potentials are reconstructed. This reconstruction serves as a test case for counter-education, addressing the challenges of the era of meaninglessness. Referring in detail to the Israeli/Palestinian context, it confronts the wrecking of the modern utopia of nonviolent, democratic public spheres in which a rational, solidarian, and pure human being replaces God. Destroying the Other's Collective Memory challenges our impoverished time, which not only lacks the presence of God , but lacks the meaning of his absence.
The Author: Ilan Gur-Ze'ev is Senior Lecturer in Philosophy of Education at the University of Haifa in Israel. Among his publications are The Frankfurt School and the History of Pessimism and Philosophy, Politics, and Education in Israel. He has published widely in international philosophical and educational journals on issues such as cyberspace, feminism, postmodernism, critical pedagogy, counter-education, and the Holocaust.