Critical Theory and the Human Condition: Past, Present, and Future (Counterpoints #168) (Paperback) 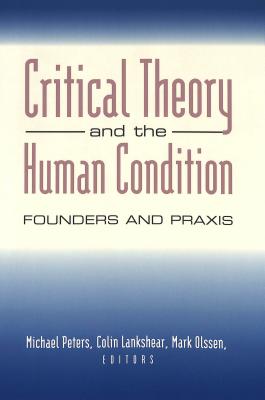 Critical Theory and the Human Condition: Past, Present, and Future (Counterpoints #168) (Paperback)

This is book number 168 in the Counterpoints series.

This book presents essays written by internationally acclaimed scholars on the leading figures and major social projects and movements within the tradition of critical theory. Critical Theory and the Human Condition is organized in two parts: Labors of the Dialectic and Projects and Movements . Labors of the Dialectic addresses key themes associated with the work of Theodor Adorno and Max Horkheimer, Walter Benjamin, Eric Fromm, Herbert Marcuse, Hannah Arendt, Karl Marx and Ludwig Wittgenstein, and J rgen Habermas and Maxine Greene. Their work is situated in relation to contemporary issues associated with the human condition. Projects and Movements deals with the new politics of cynicism, knowledge, dialogue and humanization, critical race theory, critical multiculturalism, the body and feminist aesthetics, cultural studies, and the environment.
The Editors: Michael Peters is Professor of Education at the Universities of Glasgow and Auckland. His recent books include Heidegger, Education and Modernity; Richard Rorty: Education, Philosophy and Politics; and Poststructuralism, Marxism and Neoliberalism: Between Theory and Politics. Colin Lankshear is a freelance educational researcher and writer based in Mexico and a Professorial Research Fellow at the University of Ballarat. His recent books include Teachers and Technoliteracy; Cyber Spaces/Social Spaces; and New Literacies: Changing Knowledge and Classroom Learning. Mark Olssen is Reader and Director of Doctoral Programs in Educational Studies at the University of Surrey. His recent books include The Doctoring of Childbirth, Educational Policy in New Zealand, and Michel Foucault: Materialism and Education.