37 Things I Love (in no particular order) (Paperback) 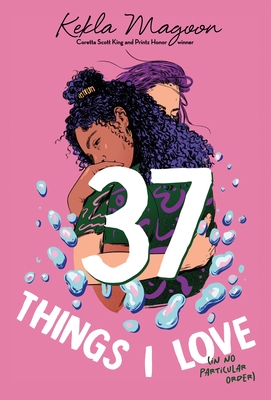 37 Things I Love (in no particular order) (Paperback)

A powerful story about friendship, death, and figuring out who you are, from the author of How It Went Down, The Rock and the River, and X: A Novel (with Ilyasah Shabazz)

Ellis only has four days of her sophomore year left, and summer is so close that she can almost taste it. But even with vacation just within reach, Ellis isn't exactly relaxed. Her father has been in a coma for years, the result of a construction accident, and her already-fragile relationship with her mother is strained over whether or not to remove him from life support. Her best friend fails even to notice that anything is wrong and Ellis feels like her world is falling apart. But when all seems bleak, Ellis finds comfort in the most unexpected places.

Life goes on, but in those four fleeting days friends are lost and found, promises are made, and Ellis realizes that nothing will ever quite be the same, in 37 Things I Love (in no particular order) by Kekla Magoon, who won the Coretta Scott King-John Steptoe Award for the Rock and the River, whose book X :A Novel (written with Ilyasah Shabazz) was longlisted for the National Book Award, and who earned the Coretta Scott King Author Honor for How it Went Down.

"This coming out story takes the reader on her journey as she deals with the family dynamics, and tries to understand her own sexual orientation." -Children's Literature

Kekla Magoon writes novels and nonfiction books for teens, including 37 Things I Love, The Rock and the River, How It Went Down, Light It Up, and Revolution in Our Time: The Black Panther Party’s Promise to the People, which was a National Book Award Finalist, LA Times Book Prize Finalist, and Michael L. Printz Honor book. Kekla received the 2021 Margaret A. Edwards Award for her significant and lasting contribution to young adult literature. Past recognitions include a Boston Globe/Horn Book Award, an NAACP Image Award, and four Coretta Scott King Honors. She holds a BA from Northwestern University and an MFA from Vermont College of Fine Arts. When she is not writing, Kekla can be found entertaining a pair of energetic orange cats or riding her bike through the hills of Vermont.

“…coming of age, death, hope, love--and Ellis is a character to care about and cheer on for a long, long time.” —Horn Book