No Choirboy: Murder, Violence, and Teenagers on Death Row (Paperback) 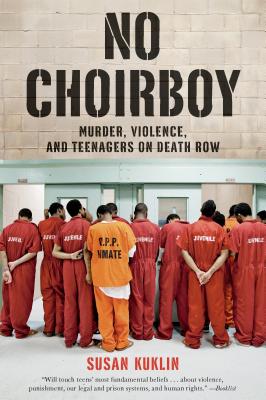 No Choirboy: Murder, Violence, and Teenagers on Death Row (Paperback)

No Choirboy takes readers inside America's prisons and allows inmates sentenced to death as teenagers to speak for themselves. In their own voices—raw and uncensored—they talk about their lives in prison and share their thoughts and feelings about how they ended up there. Susan Kuklin also gets inside the system, exploring capital punishment itself and the intricacies and inequities of criminal justice in the United States.

This is a searing, unforgettable read, and one that could change the way we think about crime and punishment.

No Choirboy: Murder, Violence, and Teenagers on Death Row is a 2009 Bank Street Best Children's Book of the Year.

Susan Kuklin is the author of nonfiction books for young adults and children, including No Choirboy: Murder, Violence, and Teenagers on Death Row. She is also a professional photographer whose photographs have appeared in Time, Newsweek, and the New York Times. She and her husband live in New York City.

“* This powerful book should be explored and discussed in high schools all across our country.” —School Library Journal, starred review

“A searing and provocative account that will touch teens' most fundamental beliefs and questions about violence, punishment, our legal and prison systems, and human rights.” —Booklist