Flags in the Window: Dispatches from the American War Zone (Counterpoints #314) (Hardcover) 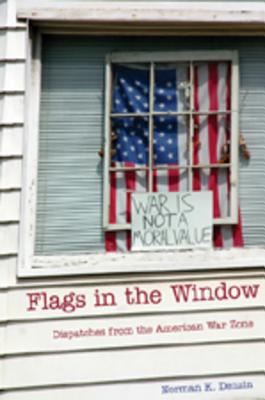 Flags in the Window: Dispatches from the American War Zone (Counterpoints #314) (Hardcover)

This is book number 314 in the Counterpoints series.

Written over a four-year period and originally conceived as Notes from a Homeland War Diary, these concise, provocative essays record on-going reactions - reports from the war zone - to what Joan Didion calls the new normal under the Bush Administration. They rethink questions of power, political authority, patriotism, democracy, science, civil society, and the academy. Flags in the Window should be read by everyone who has an interest in the alternative view of the Iraq War.
The Author: Norman K. Denzin is Distinguished Professor of Communications, College of Communications Scholar, and Research Professor of Communications, Sociology, and Humanities at the University of Illinois, Urbana-Champaign. He is the author, editor, or co-editor of numerous books, including Performance Ethnography: Critical Pedagogy and the Politics of Culture; Screening Race: Hollywood and a Cinema of Racial Violence; Performing Ethnography; and 9/11 in American Culture. He is past editor of The Sociological Quarterly, co-editor of The Handbook of Qualitative Research (2/e), co-editor of Qualitative Inquiry, editor of Cultural Studies - Critical Methodologies, editor of Studies in Symbolic Interaction, and founding President of the International Association of Qualitative Inquiry.