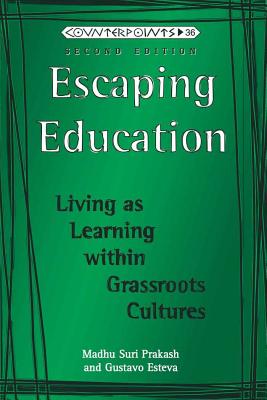 This is book number 36 in the Counterpoints series.

Escaping Education challenges the modern certainty that education is a universal good and a human right. It opens doors to alternative landscapes of learning and living that still flourish at the grassroots, within the cultures of the uneducated, the undereducated, and the illiterate who constitute the social majorities or the Two-Thirds World. It celebrates the richness of their traditions, their pluriverse of commons, common sense, and communal teaching, keeping at bay the modern reign of homo oeconomicus and homo educandus. Standing the all-too-familiar tale of education on its head, it joins the regeneration of soil cultures, resisting cultural meltdown in the global classroom.
The Authors: Madhu Suri Prakash is Professor of Education at the Pennsylvania State University and recipient of the Eisenhower Award for Distinguished Teaching. She received her Ph.D. in Philosophy of Education from Syracuse University. In addition to numerous articles in professional journals including Educational Theory, Teachers College Record, and AJE, she has coauthored Grassroots Postmodernism: Remaking the Soil of Cultures (1998). Gustavo Esteva has served as public servant, university professor, and, for the past twenty years, as a grassroots activist working with Indian groups, peasants, and the urban marginalized. The many posts he has held include President of the Fifth World Congress on Rural Sociology, Interim Chairman of the United Nations Research Institute for Social Development (UNRISD) Board, President of the Mexican Society for Planning, and Vice-President of the Inter-American Society for Planning. The author of several hundred articles and a dozen books, he has coauthored Grassroots Postmodernism: Remaking the Soil of Cultures (1998).