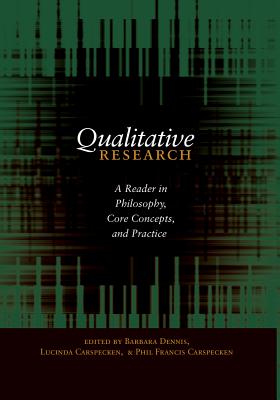 This is book number 354 in the Counterpoints series.

We conceived of this book with the idea that critical explorations into the key philosophical issues in qualitative research could throw light on distortions, power relations, hidden assumptions and possibilities within the field, and could ultimately provide the groundwork for needed change and new directions. We wanted to do this with rigor, getting underneath the contemporary divisions in qualitative research, first building up philosophy and core concepts and then returning to specific practices in qualitative research. The book, in a way, then, is a statement of hope.
We have seen many promising trends in the last few decades as academics from the groups who have traditionally been studied and spoken for in the past - indigenous peoples, women, minorities, gays and lesbians, for example - make their voices heard, as the other speaks back, and as the uses to which research is put receive more scrutiny. We see signs that qualitative research may begin to turn the tables on its own history and become a tool for emancipation rather than its opposite.
The book is divided into five sections which each focus on different aspects of qualitative methodological practices and the concepts which are inherent in the practices themselves. The editors of this book are experienced with conducting qualitative research and two of the editors teach multiple university courses on research methodology and the social and epistemological theories associated with inquiry. Many of the books available for our courses divide qualitative research into a number of disparate types and then explain philosophical and epistemological positions according to those divisions. In our opinion, such approaches inadequately confront orienting questions of human knowledge implicit to all forms of social research. We intend to produce a new book that exemplifies theory and methods in qualitative research in relation to a sound presentation of social-theoretical core concepts.
Barbara (Korth) Dennis is an Associate Professor of Qualitative Inquiry at Indiana University. She is teaches and writes at the nexus of critical social theory, qualitative research, and diversity with a particular interest in gender equity. She is completing a book on a long term ethnography with newcomer students in midwestern schools. Lucinda Carspecken is currently working on a book based on her ethnographic study of an Indiana festival site. Her other publications include research monographs written for the National Science Foundation on educational programs on Texas. She is affiliated with Indiana University primarily responsible for teaching introductory qualitative research methods courses. Phil Francis Carspecken is professor of inquiry and philosophy in the School of Education at Indiana University. He teaches courses and writes on qualitative social research, social theory and the philosophy of social science.