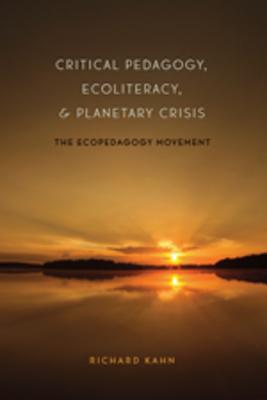 This is book number 359 in the Counterpoints series.

We live in a time of unprecedented planetary ecocrisis, one that poses the serious and ongoing threat of mass extinction. What role can critical pedagogy play in the face of such burgeoning catastrophe? Drawing upon a range of theoretical influences - including Paulo Freire, Ivan Illich, Herbert Marcuse, traditional ecological knowledge, and the cognitive praxis produced by today's grassroots activists in the alter-globalization, animal and earth liberation, and other radical social movements - this book offers the foundations of a philosophy of ecopedagogy for the global north. In so doing, it poses challenges to today's dominant ecoliteracy paradigms and programs, such as education for sustainable development, while theorizing the needed reconstruction of critical pedagogy itself in light of our presently disastrous ecological conditions. Students and teachers of critical pedagogy at all levels, as well as those involved in environmental studies and various forms of sustainability education, will find this book a powerful provocation to adjust their thinking and practice to better align with those who seek to abolish forms of culture predicated upon planetary extermination and the domination of nature.
The Author: Richard Kahn, Ph.D. (UCLA), is a critical theorist of education who is internationally recognized for his work on ecopedagogy. A long-time anarcho-vegan activist, he regularly works on behalf of animal, ecological, and social justice causes. He is Assistant Professor of Educational Foundations and Research at the University of North Dakota, and presently serves as the editor of Green Theory & Praxis: The Journal of Ecopedagogy. More information about him can be found at: http: //richardkahn.org.