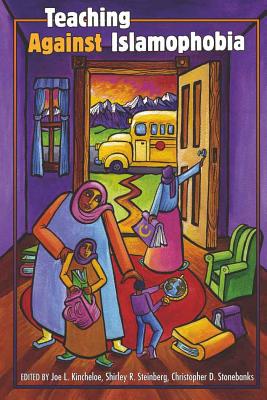 This is book number 346 in the Counterpoints series.

As corporate and governmental agencies march us towards global conflict, racism, and imperialism, this book contends that teachers must have the tools with which to combat unilateral politicization of Arabic and Muslim peoples. Teaching Against Islamophobia creates a pedagogical space for educators to engage with necessary issues and knowledges regarding the alienation of Islamic culture, religion, knowledge, and peoples.
Edited by a WASP, a Jew, and an Iranian, this book confronts the fears, challenges, and institutional problems facing today's teachers. Taking its cue from critical pedagogy, this book is a collection of essays by artists, writers, performers, and educators committed to naming the insidious racism and hatred of those who would isolate and vilify Islam.
The Editors: Joe L. Kincheloe (1950-2008) was the author of over 55 books and hundreds of articles. His most recent book was Knowledge and Critical Pedagogy. His research/teaching involved devising and engaging students in new, more intellectually rigorous, socially just ways of analyzing and researching education. He developed an evolving notion of criticality that constructed innovative ways to cultivate the intellect as it worked in anti-oppressive and affectively engaging ways. With Shirley R. Steinberg, Joe founded the Paulo and Nita Freire International Project for Critical Pedagogy, which aims to improve the contribution that education makes to social justice and the democratic quality of people's lives. Shirley R. Steinberg is the author and editor of many books in critical pedagogy, urban and youth culture, and cultural studies, her most recent include: 19 Urban Questions: Teaching in the City, Second Edition (2010); Diversity and Multiculturalism: A Reader (2009); Media Literacy: A Reader (2007); the award-winning Contemporary Youth Culture: An International Encyclopedia; with Joe L. Kincheloe, Christotainment: Selling Jesus Through Popular Culture (2009); Kinderculture: The Corporate Construction of Childhood (2010, 2004); and The Miseducation of the West: How Schools and Media Distort Our Understanding of the Islam World (2004). She directs freireproject.org. She is presently teaching at McGill University. Christopher D. Stonebanks is Associate Professor of Education and currently the Chair of the Research Ethics Board at Bishop's University. Raised in North America of mixed Iranian-European descent, he often brings the experience of living life as the Other to his teaching, research, and writing. Recent publications explore the failings of mainstream multiculturalism to recognize the continued prejudices regarding Muslims and those commonly associated with Islam. He is the author of James Bay Cree Students and Higher Education (2008), and co-editor (with Ozlem Sensoy) of Muslim Voices in School (2009).