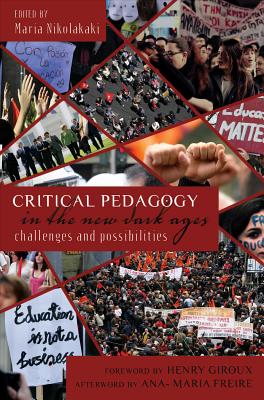 This is book number 422 in the Counterpoints series.

This book unmasks the neoliberal ideology that led modern civilization to withdraw from its previous accomplishments into what may be called the new Dark Ages. The international group of contributors to this volume aggressively rejects the siege of society by capitalism and the resulting deterioration. These authors engage a critical pedagogy that brings hope as it acknowledges the potential for social justice and a language of possibility in the educational arena. The prestigious authors assembled here range from Stanley Aronowitz to Slavoj Zizek and their subjects from Higher Education Under Siege (Henry Giroux) to On the Right and Duty to Change the World (Paulo Freire).
Maria Nikolakaki, Assistant Professor of Pedagogy and Education at the University of Peloponnese, is a critical theorist who is well known in her field. She has published extensively in the areas of critical pedagogy, mathematics education, citizenship education, and lifelong learning.