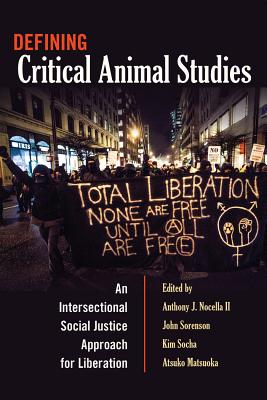 This is book number 448 in the Counterpoints series.

This is the first book to define the philosophical and practical parameters of critical animal studies (CAS). Rooted in anarchist perspectives that oppose all systems of domination and authoritarianism, CAS both challenges anthropocentrism and presents animal liberation as a social justice movement that intersects with other movements for positive change. Written by a collection of internationally respected scholar-activists, each chapter expands upon the theory and practice underlying the total liberation approach, the roles of academics and activists, and the ten principles of CAS. With apolitical animal studies and exploitative animal research dominating higher education, this book offers a timely counter-narrative that demands the liberation of all oppressed beings and the environment. Defining Critical Animal Studies will interest educators, students, activists, community members, and policy makers seeking accessible theory that can be put into action.
Anthony J. Nocella II is Visiting Professor in the School of Education at Hamline University, Senior Fellow of the Dispute Resolution Institute at the Hamline Law School, and co-founder of the Institute for Critical Animal Studies. John Sorenson is Professor in the Department of Sociology at Brock University, where he teaches critical animal studies, as well as courses on globalization and on anti-racism. His books include Animal Rights, Ape, and Culture of Prejudice. Kim Socha is author of Women, Destruction, and the Avant-Garde: A Paradigm for Animal Liberation, co-editor of Confronting Animal Exploitation: Grassroots Essays on Liberation and Veganism, and Professor of English at Normandale Community College. Atsuko Matsuoka is Associate Professor at the School of Social Work at York University. She is co-author of Ghosts and Shadows: Constructions of Identity and Community in an African Diaspora and Critical Social Work and Analysing Practice through Deconstruction: Experiential Learning.