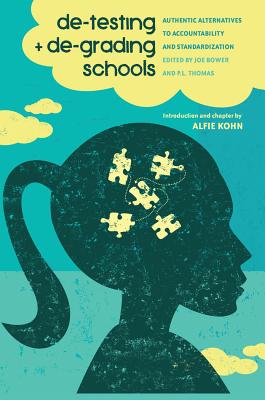 This is book number 451 in the Counterpoints series.

This book has won the CHOICE Outstanding Academic Title award 2014. A century of education and education reform along with the last three decades of high-stakes testing and accountability reveals a disturbing paradox: Education has a steadfast commitment to testing and grading despite decades of research, theory, and philosophy that reveal the corrosive consequences of both testing and grading within an education system designed to support human agency and democratic principles.
This edited volume brings together a collection of essays that confronts the failure of testing and grading and then offers practical and detailed examinations of implementing at the macro and micro levels of education teaching and learning free of the weight of testing and grading. The book explores the historical failure of testing and grading; the theoretical and philosophical arguments against testing and grading; the negative influence of testing and grading on social justice, race, class, and gender; and the role of testing and grading in perpetuating a deficit perspective of children, learning, race, and class.
The chapters fall under two broad sections: Part I: Degrading Learning, Detesting Education: The Failure of High-Stake Accountability in Education includes essays on the historical, theoretical, and philosophical arguments against testing and grading; Part II: De-Grading and De-Testing in a Time of High-Stakes Education Reform presents practical experiments in de-testing and de-grading classrooms for authentic learning experiences.
Joe Bower is a teacher in Red Deer, Alberta, Canada. He spent 10 years teaching grade eight language arts and science in a middle school, and is now a special education teacher in a children's psychiatric assessment unit. Follow his work at www.joebower.org and @joe_bower. P. L. Thomas, Associate Professor of Education (Furman University, Greenville SC), taught high school English in rural South Carolina before moving to teacher education. He is currently a column editor for English Journal (National Council of Teachers of English) and series editor for Critical Literacy Teaching Series: Challenging Authors and Genres (Sense Publishers). Follow his work at http: //wrestlingwithwriting.blogspot.com/ and @plthomasEdD.