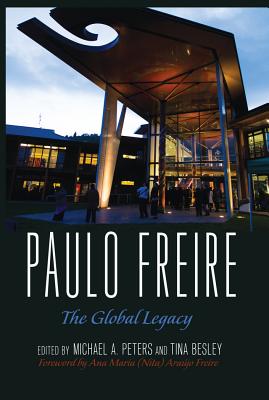 This is book number 500 in the Counterpoints series.

This collection is the first book devoted to Paulo Freire's ongoing global legacy to provide an analysis of the continuing relevance and significance of Freire's work and the impact of his global legacy. The book contains essays by some of the world's foremost Freire scholars - McLaren, Darder, Roberts, and others - as well as chapters by scholars and activists, including the Maori scholars Graham Hingangaroa Smith and Russell Bishop, who detail their work with the indigenous people of Aotearoa-New Zealand. The book contains a foreword by Nita Freire as well as chapters from scholars around the world including Latin America, Asia, the United States, United Kingdom, New Zealand, and Australia. With a challenging introduction from the editors, Michael A. Peters and Tina Besley, this much-awaited addition to the Freire archive is highly recommended reading for all students and scholars interested in Freire, global emancipatory politics, and the question of social justice in education.
Michael A. Peters is Professor of Education at Waikato University, New Zealand and Emeritus Professor at the University of Illinois at Urbana-Champaign. He is Executive Editor of Educational Philosophy and Theory, Policy Futures in Education, E-Learning & Digital Media and Knowledge Cultures, and is an Honorary Fellow of the Royal Society of New Zealand. His most recent books include Obama and the End of the American Dream (2012) and Education, Philosophy and Politics: Selected Works (2012).Tina Besley is Professor of Education at Waikato University, New Zealand and Adjunct Professor at the University of Illinois at Urbana-Champaign. Her four books on Michel Foucault have been critically acclaimed. In 2009, her book Subjectivity and Truth: Foucault, Education and the Culture of Self (Peter Lang, 2007), co-authored with Michael A. Peters, was awarded the American Educational Studies Association Critic's Choice Award.